There’s a renaissance of sorts occurring in Seattle right now, from the chart-busting hits of Macklemore & Ryan Lewis to the bone-crunching Super Bowl win of the Seattle Seahawks to a tech community that’s firing on all cylinders. Madrona Venture Group’s Matt McIlwain certainly likes what he sees in his adopted city, and he thinks more good things are to come, especially in the burgeoning tech community. So, what is the community lacking?

“I honestly think that some of it is confidence, to really believe in ourselves,” said McIlwain, speaking on this past weekend’s GeekWire podcast. “One of the things I loved about the Seahawks this season is they talked about this idea of: ‘Why Not Us?’ For a long time, forever as we know, we didn’t have a Super Bowl champion in Seattle. I think our tech community — we’ve got the talent; we’ve got the access to the insights and the information; and we are on the front of a lot of these big trends So, why not us for the next 10 years? I think it should be a rallying cry for the community.”

Here are more excerpts from the show, including a few of McIlwain’s thoughts on newly-appointed Microsoft CEO Satya Nadella and how Microsoft and Amazon will fare in their fight for the cloud.

Todd Bishop: In the cloud computing area, it seems like Seattle has got that market locked up, as a region, if you look at Amazon Web Services and Windows Azure. Is that the case?

McIlwain: Certainly on the infrastructure side, Seattle is the cloud capital of the world. There’s no doubt about it. Amazon is the No. 1 player. Microsoft is the No. 2 player. IBM tries to protest a lot with their SoftLayer acquisition and all, but a lot of that isn’t really cloud, in my opinion. If you want to look to a next player that influences a lot of things, it’s VMware — which, by the way, the former CEO of VMware, Paul Maritz, lives here. The current CEO of VMware, Pat Gelsinger, lives in Portland. So in the greater Pacific Northwest we have this incredible richness on the cloud computing side.

TB: What does that mean for the economy? So you’ve got all these data centers out in Quincy and around the world. Does that really have the impact that, say, a Boeing did back in the day, when you look at the Seattle economy?

McIlwain: It’s actually more significant than that, because cloud computing is the next platform. It is the way that computing is going to be done. You can buy these discrete services and put them together how you want, and build applications on top of that. So there’s a whole new ecosystem being built because of that. We’ve got great companies in town like Chef, and 2nd Watch, which is helping people put those pieces together on Amazon and run their applications. I could go down a long list. Tier 3, which was just bought by CenturyLink. These are all companies that are playing in the cloud platform ecosystem.

TB: In some cases, companies that you’ve invested in.

John Cook: I’m curious, with your lens on this specific market, Amazon is certainly the 800-pound gorilla here, how do you think Microsoft is competing against them, and what does Satya Nadella have to do to try to win some market share against Amazon?

McIlwain: I think Satya has done a really good job in this area, and it probably helped his candidacy to become CEO, and Scott Guthrie, who’s taken over for him in the cloud and enterprise business, is also a really great talent. One of the things they’ve done is said, hey, we have a lot of customers that already have our operating systems, our hypervisors on premise, so this whole area of hybrid cloud is an area that’s of natural strength for them. They’ve also got applications. Amazon doesn’t have applications. So to be able to attach Office 365, or SharePoint in the cloud, or other applications really can play to Microsoft’s strengths. And finally, they have an understanding of a selling motion, where they can bundle some of their cloud capabilities for free with a broader enterprise license and give you a chance to try it out.

TB: What did you think of the Forbes column that said Microsoft should move to San Francisco?

McIlwain: I’ve gotta admit, I thought this was one of the most bizarre columns I’ve ever seen. Even more intriguing from a writer who was writing out of Boston, which is, at least in the information technology world, on a pretty steady state of decline. I guess the premise of it is that you’ve always got to have access to the best people, and the best insights, and the best information. I think that Microsoft can get that up here in Seattle in spades, and they’re not going to get much incremental (improvement) down in the Valley.

TB: To a large extent, Silicon Valley and San Francisco have come to Seattle over the past decade, with all of these branch offices that all of these tech giants have opened here.

One of the things that people miss is that if you look at the largest tech companies in the world, by market cap, two of them are in Silicon Valley, and two of them are in greater Seattle, Microsoft and Amazon. These are the folks who are driving and capturing value. Amazon is an innovation factory. 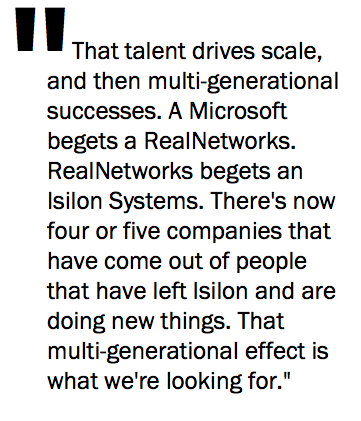 McIlwain: Oh, of course, somehow Microsoft and Amazon are evil, and Google does no evil? Is that what they’re trying to tell us down there? We think the innovation is great up here.

JC: The one part of his column that you can comment on directly, because you’re doing a lot of investments in startups, was that maybe the startup ecosystem isn’t as strong, and that investors are risk-averse here. This is something I hear covering the startup and entrepreneurship beat a lot is that the investors here aren’t willing to take as big a risk, and that in Silicon Valley money is just flowing left and right.

McIlwain: It certainly can appear that way. There’s no doubt that Silicon Valley is six to seven times bigger than the Greater Seattle ecosystem, if you just measure it by the amount of venture capital dollars that get invested on a year-in and year-out basis. So they’ve got the size on us. But what they are saying there, which I don’t agree with, is that there’s a lack of risk-taking, a lack of a desire to innovate. We see that all over the place in Seattle. We see that in the companies that we’ve invested in, and in a lot of the other companies that we’ve looked at. So I think we’re in a pretty strong position. It’s just not at the same scale, and I think that’s a fair point.

TB: What would it take for Seattle to compete more effectively with San Francisco, given the differences in size?

McIlwain: One of the things is that we now have these two anchor tenants, and we now have a mobile ecosystem here. We’ve got all these significant development offices. When I moved to Seattle 15 years ago, we had Microsoft, and we had some good DNA within the mobile industry, but it was really concentrated in the mobile industry. So I think we’ve come a long way. It used to be that people were worried about moving to Seattle, because if the first job didn’t work out, what were they going to do next? We do not hear that anymore. So it is a battle for talent, and that talent drives scale, and then multi-generational successes. A Microsoft begets a RealNetworks. RealNetworks begets an Isilon Systems. There’s now four or five companies that have come out of people that have left Isilon and are doing new things.

That multi-generational effect is what we’re looking for. They got a head start on that in Silicon Valley. It started with a bunch of chip companies back in the 60s. So we’ve got a little ways to go, but give it time. I’m feeling good about our prospects.

JC: Madrona is going strong and has a nice-sized fund to support new companies, but I do think there’s a weakness that has developed over the last several years where we’ve lost some of our venture capital firms.

McIlwain: It’s not as much about the capital scarcity vs. the company-building expertise, to really come alongside these young companies and help them build them into successful businesses. Venture capitalists get paid to do that. That’s our job. Angel investors can help doing that but they don’t have the same level of resources often that we do. So having more indigenous venture capital would be good. We believe there’s a much bigger pie to be had in Seattle.

To hear to the full conversation with McIlwain, including his thoughts on Microsoft CEO Satya Nadella, listen to the show using the audio player below or directly via this MP3 file. The conversation begins in the second segment, starting at the 8:15 mark.