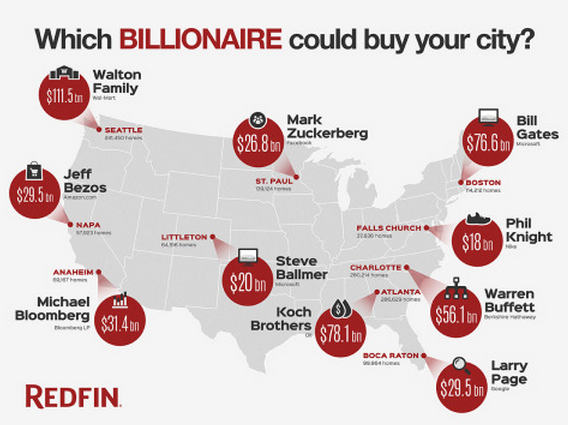 Microsoft co-founder Bill Gates could buy all of the homes in Boston. Amazon.com CEO could do the same in Napa, while Google co-founder Larry Page could do so in Boca Raton.

That’s the latest finding from real estate company Redfin, which put the fortunes of some of the richest Americans up against the total housing value in some cities. Gates, for example, could buy every one of the 114,717 single-family homes, condos and townhouses in Boston for a value of $76.6 billion.

“In this fictional real estate investment, the 30 billionaires on our list, with a combined fortune of $582 billion, could afford to own a staggering 6 percent of the total U.S. home equity,” notes Nela Richardson, the newly-appointed chief economist at Redfin.

The map is stunning, though should not be surprising to those who’ve watched the fortunes of the richest Americans continue to grow and grow and grow.

Given that the average American struggles to afford a home, Redfin wanted to illustrate just how many homes the wealthiest among us could buy. For the sake of this illustration, Redfin assumed that wealthy families, such as the Waltons of Wal-Mart and the Koch brothers, would pool their money if they were going to purchase an entire city. So, while Bill Gates is the world’s richest person, he doesn’t have enough money to purchase every home in Seattle, while the Waltons combined have nearly twice his wealth, with $154.8 billion, and could easily afford Seattle’s 241,450 homes at a combined purchase price of $111.5 billion.