Barnes & Noble laid out a new plan for its Nook e-reader business this morning, announcing plans to partner with Samsung on a Nook-branded Galaxy Tab 4 tablet. So what does this mean for the bookseller’s partnership with Microsoft, and its competition with Amazon?

GeekWire spoke with Barnes & Noble CEO Mike Huseby via phone this morning, getting his response to those questions and more.

Huseby, who led the Nook business before taking over as Barnes & Noble CEO in January, says the company is still dedicated to its partnership with Microsoft, beefing up content for Windows devices even as it focuses on the new Samsung Galaxy Tab 4 Nook tablet.

The Barnes & Noble CEO also sought to differentiate the company’s approach from Amazon’s strategy in the book market.

“We’re not standing still and quaking in our boots over Amazon,” he said. “We think we have a great business, and it’s a different business and it’s a much more personal business with more feeling to it than what they have.”

Continue reading for edited excerpts from the interview.

Can you step us through the reasoning for going this route with Samsung?

Huseby: We’ve been pretty clear in recent times about our strategic intent to seek a high-quality third-party partner for our hardware needs, which would allow us to continue to rationalize Nook and really focus on what we’re good at and what we can be competitive at in the current landscape where you have giants like Amazon and Apple and others who are producing tablets. We don’t have that kind of scalable cost structure. Our intent was to seek a high-quality partner, and I don’t think you’d find a more high-quality partner — both U.S. and worldwide — than Samsung. It’s got a great brand, and has done a great job of building its market share in tablets.

It’s important to understand these are co-branded devices. They’re customized devices that are being made, and software being loaded especially for our Nook brand and our Barnes & Noble and Nook customers. We’ve been very consistent saying that was our objective, and that’s what we’ve done. The reason we chose Samsung is that we complement each other very well, and they have a very strong interest in putting the highest-quality digital reading experience on their devices, and that’s now what they’re able to do with the partnership we’ve struck. Just like we have an interest in having a very high-quality hardware manufacturing partner, they have an interest in having a very high-quality, broad, deep catalog, store and reading experience, which we believe ours is.

It helps us as well as it helps them. That’s what partnerships should do.

What’s the status of your Microsoft partnership, and how does the Nook and Samsung partnership affect Barnes & Noble’s relationship with Microsoft?

Huseby: We have a very, very good relationship with Microsoft. We’re in contact with them on an ongoing basis about things that we’re doing together. As you know, Microsoft is a partial owner, about 17 percent, of the Nook Media entity. This is a good move for Nook, therefore it’s a good move for Microsoft as an owner of Nook Media.

Does Samsung plan to take any kind of equity stake in Nook Media?

Huseby: Not to my knowledge. There’s been no discussion of that in connection with this agreement. This is an agreement that’s a commercial arrangement, where we’re partnering to leverage their strengths and our strengths.

We’ve been very public about saying we’re going to have a black-and-white and a color reading device to offer. We believe that’s important, and our key objective is delivering a great reading experience and selling content. We are not in the business of selling hardware to sell hardware. We are in the business of selling hardware so that we can sell and deliver great reading experiences and content. That’s why this is such a great deal. It customizes the Samsung Galaxy Tab 4, which is now the Samsung Galaxy Tab 4 Nook, for our customers. When they turn the screen on they’ll be able to dive into that reading experience immediately and be able to purchase digital books and magazines from our store, much more easily than they could if this were some kind of generic tablet.

Did you discuss with Microsoft the idea of doing a tablet with them, prior to going with Samsung?

Huseby: We have a partnership with Microsoft that was signed in April of 2012 and it was closed in October of 2012. … We’ve discussed everything with them that they have an interest in and we have an interest in, as you can imagine. As you know, they have their own hardware, they’ve purchased and closed on Nokia, which is I think a great acquisition for them, and we have a good relationship with them, which is about all I can say. By the way, and this is an important point, this is not an exclusive deal with Samsung. 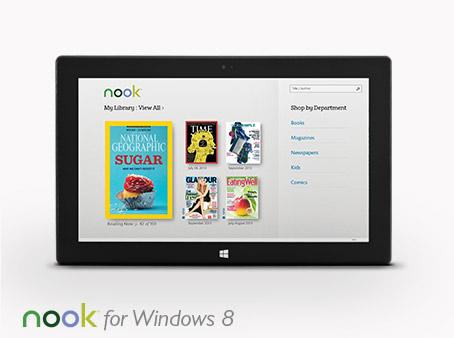 So what can we expect to see from the Microsoft and Barnes & Noble partnership going forward?

Huseby: We’ve been very clear about what we’re in business to do together. We’re in business to drive content sales over the Win8 platform. That’s what we’re both trying to do. We’re engaged in acquiring content, purchasing it and delivering it not just domestically, but we’re now in 32 countries in 21 different languages across the globe, and we’re going to expand that as the agreement says we will.

Where do you feel you are competitively against Amazon at this point, and how does the new Samsung agreement position you to compete with Amazon?

Huseby: I think where we are competitively is they’re much bigger than we are. Somewhat of a tongue-in-cheek comment. What we’re interested in doing is servicing our customers the best way we can, delighting our customers, and putting product in our stores and on bn.com that they’ll want and that they’ll buy, and that will be profitable for us over some reasonable time horizon. That’s what we’re doing.

We can’t worry constantly about what Amazon is doing. They have their own issues and we aren’t focused on them as our only competition. We’re really more focused on ourselves in terms our standards, and how we interact with our customers, and what kind of company we’re creating. The kind of customer experience we’re creating in our stores and on the Nook — in this case the Galaxy Tab 4 Nook as well as the GlowLight, which we’ll continue to offer.

We’re very encouraged and excited about where we’re going, and we’re here for the long run. The headlines last year, and some pundits are still writing about whether we’re going to be around or not. It’s very hard to understand. We have a very strong financial position. We’re not Amazon, nor do we want to be Amazon. We’re a different company. We have 40,000 booksellers that give a personal touch of service to our customers. We have a redesigned website we’re about ready to launch that we’ve talked about, and we’re making improvements everywhere. 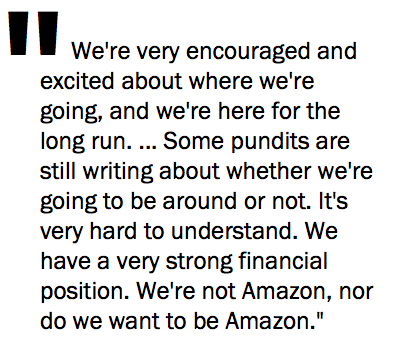 We’re not standing still and quaking in our boots over Amazon. We think we have a great business, and it’s a different business and it’s a much more personal business with more feeling to it than what they have. … It’s much more of a feeling and emotional attachment that customers have to our business than they have to Amazon. Our customers who walk through our doors have a sense of ownership in each of the stores. Stores are run locally and they do very well in terms of the community feeling that they engender, the ability to browse through books, take your kids to the store, and also just have a great feeling about being able to physically connect with people instead of surfing the web for a price. We’re a different company than they are.

Has the dispute between Amazon and Hachette impacted you in a positive way?

Huseby: We work closely with all of the publishers to try to have great relationships. I think it really comes down to what can you do for your customers when Amazon has obviously left a void to be filled. I’m not going to get into a discussion of Amazon’s tactics or anything else. They’re doing what they think is appropriate from a business perspective.

Hachette has its own reactions to it. We’re working to support all of the authors that Hachette has, and we’re working to support Hachette just like we always do. We’re not going to take shots at anybody who is doing something specifically, it’s not our way of doing things. We’re more focused on doing things the way we want to do them, the right way, and not trying to play dirty politics with another company.

What are your long-term aspirations for the Samsung partnership?

Huseby: It’s like anything else — once you enter into a partnership, then you have to execute. Our long-term aspirations are really based on our desire to have this be very successful in the next 12 months. We would define success as this clearly being a product that our customers want and they accept and go buy it, and use it to buy content. Aspirationally, if that works, you might think about expanding your relationship with Samsung or other companies if you could see yourself doing that in a way that makes sense for your customers.

But right now we want to execute on this deal. It’s a very important partnership for us. It’s a very important accomplishment and a strategic objective that we set out. It’s going to have, I think, a great impact on our stores, not just on Nook itself but the Samsung brand coupled with the Nook brand will help drive interest in the company as well as traffic to the stores and the website. There are going to be intangibles around this that are important, as well.