Seattle Seahawks cornerback Richard Sherman — the trash-talking Stanford-educated Super Bowl champion — is in the running to be on the cover of the Madden NFL 15 video game.

But, before Sherman, who just this week secured a whopping $57 million contract, gets the cover he must win the hearts of video games fans. EA, which publishes the game, is hosting a 16-player online bracket to determine who will grace the cover.

And, at least based on chatter on Twitter, Sherman appears to be the front runner.

Hawks fan may not want the 6-foot-3, 195-pound Sherman to win. As our news partner King 5 notes, 14 of the past 16 players who appeared on the cover either sustained serious injuries or performed poorly.

Yes, there is a “Madden curse” — one that even applies to former Seahawks running back Shaun Alexander, who was on the cover in 2006 after an MVP season.

Even more interesting, Sherman could face nemesis Colin Kaepernick of the San Francisco 49ers — we mean Silicon Valley 49ers — in a third-round matchup later this month.

That could get very interesting.

Who would you vote for if that happened? 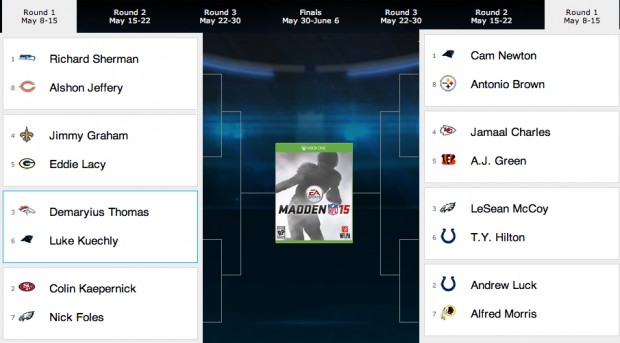