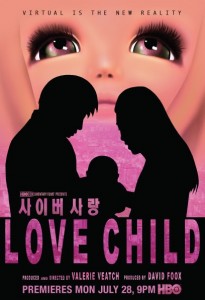 Is there anything that this CEO can’t do?

T-Mobile’s John Legere generally has his hands full trying to revive the Bellevue-based carrier, but here’s something else he can add to his resume: Executive Producer.

We noticed recently that Legere’s name popped on the credits for “Love Child,” a film currently being pushed nationwide through various film festivals and a deal with HBO. We are invited to a screening in Seattle next Wednesday by HBO and SIFF followed by a panel discussion, featuring Legere and Valerie Veatch, the film’s director.

Legere worked on the personal project with two daughters, Christina and Elizabeth Legere (see photo above from last night’s New York premiere), who are also named as executive producers, according to a press release. “Love Child” will air several times on HBO, starting with the July 28 premiere followed by a handful of more dates in July and August, so set your DVRs.

The film, which also appeared at Sundance, tackles the subject of Internet addiction, which is a frequently discussed topic in the technology world. It documents the gruesome true story of a South Korean couple whose child died from neglect due to their online gaming addiction.

The film claims it is the first case of Internet addition that went to trial. The parents were ultimately found guilty of involuntary manslaughter after claiming that Internet addiction was a mental illness. The two would leave their three-month-old baby at home while they spent six to 12 hours a day gaming. The daughter starved to death in 2010.

The film is timely given that South Korea, which is home to one of the most advanced broadband networks in the world, is currently considering a bill that would classify Internet and online gaming addiction as a factor in criminal prosecutions, much like an addiction to gambling, drugs and alcohol.

Here’s the trailer for “Love Child”: