Avvo has attracted $37.5 million in fresh capital, a huge capital infusion that the Seattle company will use to grow its marketplace for matching attorneys and clients. Total funding in Avvo — founded seven years ago by former Expedia general counsel Mark Britton — now stands at $60.5 million.

Avvo didn’t necessarily need the money, since the 150-person company was solidly profitable last year. But Britton said that they’ve got big plans in store, including the possibility of international expansion as well as some undisclosed products in the works.

“We have, and also had, a very nice cash position,” said Britton. “We felt that we … could just move that much faster to increase our leadership in the category — to have that buffer, that support — to accelerate in the areas where we are doing very well, and also explore some areas that we think fit nicely into our ecosystem.”

A portion of the funds — provided by technology hedge fund Coatue Management and existing investors Benchmark, Ignition Partners and DAG Ventures— also are being used to cash out some of the early shareholders.

Avvo is attracting six million visits per month, some of whom come to the site to find a lawyer or research a legal question. About 160,000 attorneys participate on the site, with 99 percent of the legal questions answered. Britton calls that an “unbelievable number,” noting that no one else “has ever had that number of lawyers using a single platform.”

The new funding comes about 18 months after Avvo sold off its health care practice, doubling down on the legal market. 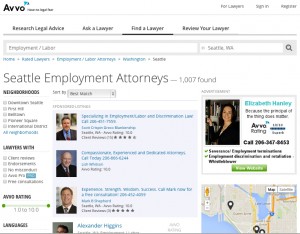 Avvo is a bit like TripAdvisor and Match.com, a central repository for information in the legal profession, but also a matchmaking service that connects clients and lawyers. There are also many parallels to Zillow, the online real estate juggernaut co-founded by Rich Barton, who also serves on the board of Avvo.

Just like Zillow attempts to connect home shoppers with real estate agents, Avvo is trying to do much the same with clients and lawyers. Britton said the model is working, with tremendous consumer benefit as well as “great lawyers getting more business.”

Some lawyers spend as little as $100 per month on Avvo, while others spend into the ten of thousands, Britton said. From the beginning, Britton said they’ve focused on building a high-quality and trusted community.

“So many sites just make the consumer feel like a piece of meat, rather than providing a meaningful marketplace where they can interact and understand their situation,” said Britton. “The legal profession does not need to be complicated, and to the extent that we can create equations where someone with a legal problem or a legal question gets the legal help they need … and great lawyers are getting more business. That’s the Avvo equation we are looking for in all of the different products.”

In that regard, Britton said that Avvo is far different from LegalZoom, which he said is built around the proposition of eliminating the lawyer. That makes their market opportunity rather “thin,” centered around incorporation documents and other basic services.

“We are a believer that, over the long-term, what consumers ultimately want, is a lawyer,” said Britton.

Avvo continues to grow its employee base, but Britton didn’t want to offer a number of where they’ll end up later this year. “I think a lot of companies confuse size with success,” he said. “I want to continue executing as well as we have.”

He expects the company to continue to be profitable in 2014, though it may lose money the following year. “It is not going to be deep in the red, ” he said. “We have a strong enough business right now, that I think we can stay solidly in the black for the foreseeable future.”

But, if the right opportunity presents itself, Britton said he wants to be able to attack it. After all, he says there’s plenty of opportunity to “build more products that make navigating the legal profession as simple as it should be.”