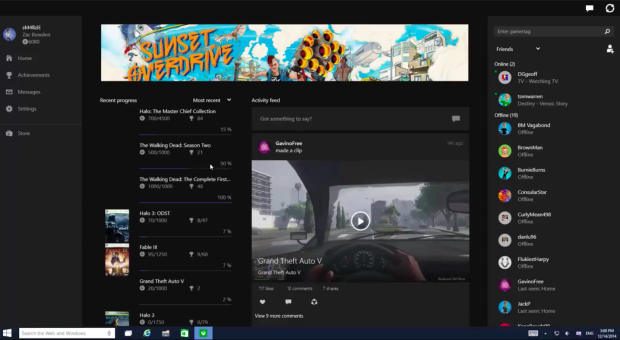 Microsoft isn’t showing off the consumer features coming to Windows 10 just yet, but some of what’s coming has been revealed thanks to a leaked preview build that has appeared online. Build 9901 brings with it a number of improvements, including a couple new features.

Here’s a video from WinBeta that shows off what’s new:

As expected, the build comes with support for Cortana, Microsoft’s digital assistant that first launched with Windows Phone 8.1 earlier this year. She lives in a search bar that’s stuck next to the Start menu button in the task bar (though users can hide it if they want), and will answer any questions asked of her in voice or text form, just like on the PC. Cortana’s settings carry over from a user’s Windows Phone as well, so users will get access to their same saved places and interests if they have a Microsoft-powered handset.

The Xbox app also got a redesign, with a new look that looks a lot like Steam, the online gaming marketplace operated by Bellevue-based Valve that’s the dominant player in the PC game space. That — along with Xbox head Phil Spencer’s slated appearance at the next Windows 10 press event — may signal that Microsoft wants to get into running its own online market for PC games, a potential threat to Valve’s dominance.

Users also get access to some new modern UI apps, including an app that will allow people to contact support right from their desktop, an updated calculator, a camera app (unsurprising since this OS will be running on phones and tablets) and a new Get Started app that offers tips about what’s new in Windows 10, similar to its counterparts in past versions of Windows.

Microsoft is holding a media event on Jan, 21 to detail its plans for consumer features in Windows 10, and it’s likely we’ll learn more about what the company has planned then. A representative for the company declined to comment on the leaks.