As a part of an interview at the TechCrunch Disrupt conference in New York today, Oculus VR co-founder and CEO Brendan Iribe said that his company has big plans for its engineering and research office in Bellevue.

According to Iribe, he thinks it’s going to be a popular move.

“This is like the final frontier of nerd paradise and the metaverse,” he said. “And so, I think it will be one of the most researched areas over the next decade or so, and we’re starting to engage with schools as quickly as we can now that we have this research group.” 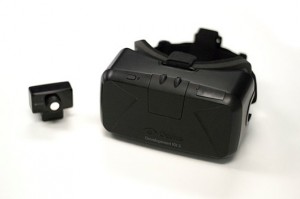 The office will be helmed by Atman Binstock and Michael Abrash, a pair of former Valve Software employees who were working on virtual reality at the Bellevue-based game development company but left to join Oculus.

Iribe said the company is also working on recruiting more top engineering talent for the office.

That sort of research is going to be key if Oculus wants to follow through on its plans. Iribe said that he could see a potential future that involves working with Facebook, which announced earlier this year that it plans to acquire the company for $2 billion, on a massive virtual world.

“This is going to be an MMO where we want to put a billion people in VR,” he said.

Of course, the company has some hurdles to face. It’s currently facing legal threats from ZeniMax, the former employer of Oculus CTO and Doom co-creator John Carmack, over what ZeniMax alleges is intellectual property infringement by Oculus. The virtual reality company has vehemently denied those charges.