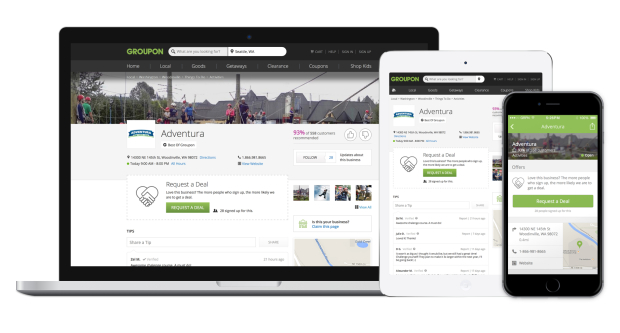 Groupon is officially unveiling a Yelp-like listings service today called Groupon Pages that aims to make the company a go-to destination for customers looking for any local busines — not just the ones offering coupons.

The Chicago-based daily deals company, which has been operating the new service under the radar for the past several months, says there are now more than 7 million pages for local businesses and 20 million “tips” from customers. Mobile versions of the pages will launch next month as part of Groupon’s upcoming app release.

From the customer’s perspective, Groupon Pages will look and feel a lot like competing review sites from Yelp, Urbanspoon or Foursquare, which offer opinions about local businesses in addition to other details, like hours of operation.

In an interview with GeekWire, Groupon’s VP of Marketplace Dan Roarty acknowledged the similarities, but said it’s his intention for the landing pages to be places where transactions take place, not just reviews. “We aren’t trying to duplicate Yelp,” he said. “We are trying to build a transaction-oriented product, with things like tips that give you the confidence to make a transaction.” 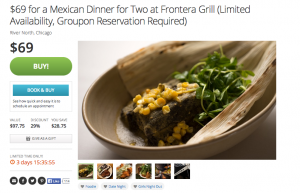 The initiative marks a major investment by Groupon, which has been testing it in several markets, including New York, Seattle and San Francisco, for the past several months. Roarty said it makes for a better experience if customers visiting Groupon not only see the three or four Sushi restaurants that are currently offering discounts, but all the available options.

The sites let customers read reviews, make reservations or find out about weekly specials. They also encourage customers to pull out their wallet to buy a Groupon or place an order for delivery. They can even request deals. For example, the Adventura park says it offers an adult ropes course at Redhook brewery just outside of Seattle. Visitors to its page have given them a 93 percent approval rating, and 28 people have requested a deal.

Some of the features have been provided by partners, including Eat24, Delivery.com, or through its own crowdsourcing methods. Specials on the site are likely to list regular weekly offerings, like “Taco Tuesday,” or “half-off wine night,” rather than nightly specials that would require more manual updates.

Coincidentally, Yelp is also trying to encourage more transactions on its pages. Yesterday, it announced a new partnership with Hipmunk to roll out hotel bookings, and earlier this year, it inked deals with food delivery services, like Eat24 and delivery.com, as well as Booker to make reservations at a spa.

Groupon says its local listings efforts are folding into a much larger strategy.

It wants to be able to tell merchants how many customers walked through their door after viewing their profile online. For that to work, merchants will have to be using Groupon’s Gnome point of sales system and a customer will have to have Bluetooth enabled on their phone. “The pages are designed to complement our Gnome product,” Roarty said.