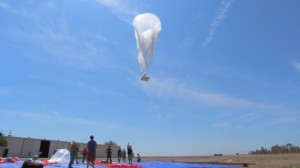 Even though one of its balloons crashed last month into power lines near Yakima, Washington, Google is pushing ahead with its ambitious project to blanket the globe with high-flying Internet-enabled balloons with service set to begin next year.

Google’s Astro Teller said they are pushing for a permanent set of balloons operating by June of next year.

“In one or several countries, you will turn on your phone and talk to the balloons,” Teller explains in an interview with Wired. “Yes, Loon will be offering service.”

The Wired report offers great detail into Project Loon, noting that the engineering team has boosted bandwidth from the balloons by 10 times, as well as increased the amount of time the balloons can stay aloft since the project first took flight last June. One such balloon, dubbed Ibis 152, is still flying after 100 days.

“That’s the kind of progress that can only happen a few more times until we’re in a problematically good place,” said Teller, the grandson of Edward Teller who is known as the “father of the hydrogen bomb.”

Google is pushing hard into the upper reaches of the atmosphere. In April, the search giant purchased solar powered drone maker Titan Aerospace, and earlier this month it shelled out $500 million for satellite maker Skybox Imaging.

With all of this movement in the skies, one has to ask: Could Google one day become a new type of rival for Boeing?