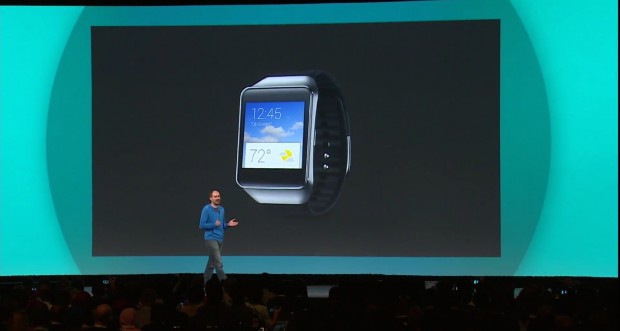 In March, Google first revealed Android Wear, the company’s interface for wearable devices like smartwatches, along with a limited developer preview. Until now, though, users haven’t been able to purchase a compatible device.

David Singleton, the Director of Engineering for Android, took the stage at the company’s Google I/O developer conference today to rehash what’s possible with Google’s operating system for smart watches, and announce a pair of new smart watches that will be available for purchase today. 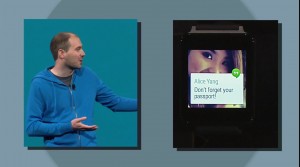 LG will be selling its G Watch through the Google Play Store later today, alongside Samsung’s new Gear Live watch. Both devices feature square screens that are always on, but remain in a dimmed state until users interact with them. Motorola’s Moto 360, the only Android Wear watch that has been announced with a round screen so far, will be available for purchase later this summer.

Singleton showed off a number of different Android Wear features, including the ability to handle notifications without pulling out a phone, catching the weather, and responding to phone calls. One of the things that sets Android Wear apart from other smartphone platforms is its use of Google Now. Users will be able to tap their watch’s face, and then tell the voice assistant what to do, like set an alarm or leave a reminder.

Today, developers get expanded access to a new Android Wear SDK that allows them to build a custom user interface, track activity, create voice actions and send data back and forth between the phone and the watch.