Google is hopping into the smart TV space once again with Android TV, a new platform to bring the company’s mobile operating system into the living room.

The move, announced at the Google I/O developer conference today, will allow users to control their television from their smartphone, game controller, Android Wear smartwatch or remote control.

One of the marquee features of Android TV is the ability for people to use Google Search to find content and information from their couch without having to flip through content with a remote. That’s a strike against Amazon’s Fire TV set-top box, which features voice search as one of its key features.

Users will also be able to play games on the television against their friends using either game controllers or mobile devices. 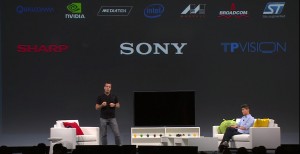 Android TV also comes with support for Google Cast, which powers the Chromecast dongle. That makes it easy for people who are visiting to share content with their host’s TV, without cumbersome setup. In addition, the company announced a new feature for Google Cast that allows people to cast to a television without even being on the same Wi-Fi network.

The platform will be powering Sony’s 2014 line of 4K smart TVs, and the 2015 line of smart TVs from Sharp and Phillips. Developers interested in building apps for the new platform will be able to purchase a set-top box to kick-start their development. 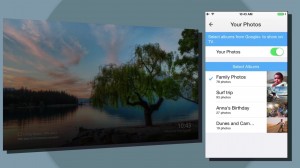 Chromecast users are also getting a handful of new features, including a new Backdrop setting that allows users to set up what images they want to show on their TV when they’re not using it. People can add images from their Google+ account, along with a variety of topics like paintings and satellite imagery. Users interested in more information about what they’re seeing can ask the Google search app “What’s on my Chromecast?” and get an up-to date answer.

People who want to show off what they’re doing on their Android device can take advantage of a new mirroring feature that allows people to share their screen with the television.