Getty Images has sued Microsoft over a new search tool that allows people to easily embed digital photographs onto their websites.

The lawsuit, filed by Seattle-based Getty Images, a leading photo repository, against cross-town Microsoft essentially alleges that Bing is making it too easy to steal copyrighted images, whether they are owned by Getty or not.

“This full-on competes with what we do with a business, which is licensing intellectual product,” said Getty Images’ General Counsel John Lapham in an interview with GeekWire. “We have watched overtime, and kept our pulse on the erosion of copyright protections as the concept of fair use moves outwards. In this instance, we decided it was time to pull the emergency brake on the process.” 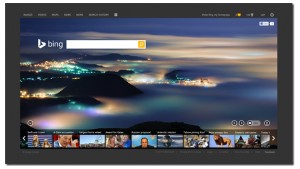 On the Bing Image Widget website, Microsoft says the point of the tool is to provide “your users with beautiful, configurable image collages and slideshows.”

In the lawsuit, Getty charges that Microsoft “has turned the entirety of the world’s online images into little more than a vast, unlicensed ‘clip art’ collection for the benefit of those website publishers who implement the Bing Image Widget, all without seeking permission from the owners of the copyrights.”

In a statement sent to GeekWire, a Microsoft spokesman said, “As a copyright owner ourselves we think the laws in this area are important. We’ll take a close look at Getty’s concerns.”

Lapham says what Bing is doing is much different than the embed tool that Getty launched seven months ago, which allows people to embed stock photos for free on Twitter, Tumblr and other non-commercial blogs and websites. He explains that’s because they are only giving permission to non-commercial websites. “We have the rights and the contractual relationships with the photographers,” he said. “And, we give attribution to photographers, and make it clear where the photos are coming from.”

Getty did not reach out to Microsoft about the tool, Lapham said, but generally has been in discussions with Microsoft and other search engines for the past year about how they’ve become substitute photo galleries, where people go to view photos instead of clicking through to the copyright owner’s website.

Getty is asking the courts to force Microsoft to take the widget down, or to enable the widget to get permission to use the imagery before distributing it on websites.

Here’s a copy of the complaint: