Amazon confirms that it has begun testing grocery delivery service in San Francisco with the help of the U.S. Postal service.

A spokeswoman called it a “small test,” adding that Amazon is “always looking for new and innovative ways to deliver packages to customers.” 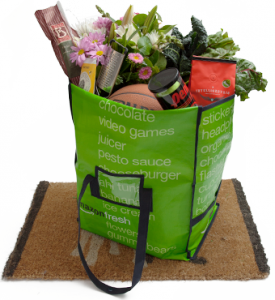 The Wall Street Journal was the first to report the partnership, saying that the trial will allow postal carriers to deliver “insulated containers of meat, dairy, produce, and other groceries to San Francisco customers’ doorsteps.”

If successful, Amazon and the postal service could consider rolling it out to more locations.

A spokesman with the U.S. Postal Service did not immediately return emails seeking comment, and a lot of the details on how the trial were not available.

The trial expands a one-year old relationship that Amazon currently has with the postal service to deliver packages on Sunday. In November 2013, the U.S. Postal Service started delivering packages on Sunday and holidays in Los Angeles and New York. Now, the service is live in dozens of cities, having rolled out faster than originally expected.

The grocery test in San Francisco builds off of Amazon’s Fresh business, which operates in a handful of markets, including Seattle, San Francisco and Los Angeles using its own trucks.

The WSJ says that the grocery delivery test will last for two months, and that the groceries will be dropped off between 3 a.m. and 7 a.m. when its trucks are not already in use. Since the containers are insulated, the trucks reportedly don’t need to be refrigerated.