Maryam Mohit was one of the first employees at Amazon.com, joining the company just months after founder Jeff Bezos began selling books online from his garage in Seattle.

During her seven-year run as Amazon’s VP of Site Development, Mohit learned what it felt like to use new technology to help fix inefficiencies in the world. So when her friend, Claudine Ryan, started talking about how difficult it was to find a physical therapist — even after contacting family and friends — a lightbulb went off in Mohit’s head and those feelings from her Amazon days came rushing back.

“At Amazon, we knew two things: The way books found an audience was completely inefficient, and the way people found products was inefficient,” Mohit told us. “I look at the service universe the same way: How do we bring information together using technology?” 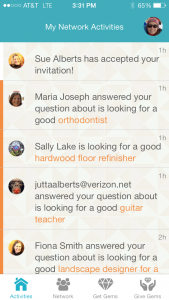 Mohit and Ryan saw a big problem, and now they’ve built a solution. Today the co-founders launched GemShare, a mobile app that offers people recommendations for local services from a “trusted network.”

The San Francisco-based startup is similar to Yelp, but with one key difference: The reviews are not from anonymous strangers, but rather people you know. For example: Your friends, your friends’ friends, or even different groups that you belong to based on geography, association or interest.

GemShare’s secret sauce is that people will generally follow the advice of people they know, rather than randoms, when seeking advice on services like doctors, tutors, music instructors, childcare providers, home improvement services and more.

“Two thumbs up from someone you know is worth more than 40 5-star reviews,” said Ryan, the company’s CEO.

After speaking with hundreds of people, the co-founders found that there wasn’t a good method that uses today’s technology — social networks and smartphones — to help people find services based on trusted positive past experiences. While apps like Yelp and discussion boards provided some answers, 83 percent of the people they surveyed still preferred asking friends and family for tips and advice in person. 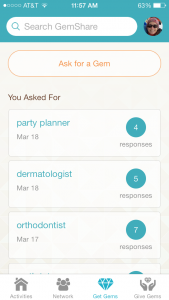 Mohit and Ryan knew that there was a better and faster way for people to leverage their entire networks.

“The way we get recommendations for all these things we need to run our lives is so antiquated and ridiculous,” said Mohit, the wife of former Expedia CEO Erik Blachford. “It really does remind me so much of the early days at Amazon.”

GemShare users can perform three main tasks with the app: Find recommendations, ask for a recommendation, or offer up recommendations to fellow community members. People can respond to questions in three ways: “Yes, I have a gem,” “Maybe, I’ll ask a friend,” or, “No, I can’t help this time.”

The app has been in beta mode for the past several months and more than 1,000 Bay Area residents have tested GemShare. Every question, on average, has received four responses and more than 80 percent of questions are answered.

The results are encouraging for Mohit and Ryan. 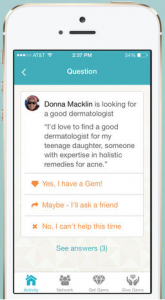 “We recently asked beta testers where they went for recommendations, and were surprised and thrilled to see that GemShare was far and away the first place,” said Ryan, a seasoned startup vet. “The reason is because they are tapping into people they trust.”

The app is free, and when asked about how GemShare will make money, both Mohit and Ryan said that they are concentrating on the user experience and will pursue potential revenue options in the future.

But for now, since GemShare reminds her so much of Amazon.com’s early days, Mohit said she’s sticking to the lessons learned while working for the Seattle online retail giant from 1996 to 2003.

“As long as we focus on making our customer happy, all kinds of good things will happen from that,” she said.