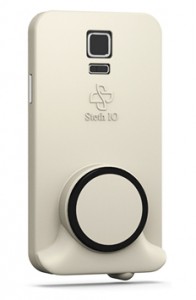 The son of a cardiologist even gave the late night comedian a heart check, to which Fallon replied: “Did that sound alright? Maybe I am a devil baby.” Fallon calls the Steth IO “unbelievable,” and says: “At 15 years old, I can’t believe your brain works this great.”

At one point, Fallon asks if the technology behind the special case uses Bluetooth.

“No, actually, it is pretty cool,” said Mulumudi, drawing laughs from the crowd. The technology uses a “sound tunnel” that delivers a heart’s sounds to the microphone of the smartphone.

“People like Bill Gates, Steve Jobs, Jeff Bezos, Howard Schultz — mostly Washington people — they all did one thing: They took an idea and expanded that concept into something that changed the world,” Mulumudi told MakerBot earlier this year.

Mulumudi is not stopping with digital stethoscopes. He’s also working on a product known as LesionSizer, a device designed to “accurately measure vascular lesions to reduce unnecessary stents.”

Mulumudi will be one of the entrepreneurs presenting at the upcoming First Look Forum, hosted this Wednesday by the Washington Technology Industry Association.