Tayloe Washburn is no stranger to taking the lead on massive, lucrative projects. The former lawyer helped organize teams that executed on important tasks such as the $3.1 billion Alaskan Way Viaduct replacement tunnel and the construction of a third runway at Seattle-Tacoma International.

But the national initiative that Washburn is now helping push ahead inside a four-story South Lake Union building is quite different. As CEO and dean of Northeastern University’s Seattle campus, Washburn is embarking on a plan to help more middle school girls become interested in areas of science, technology, engineering and math — or, STEM for short.

“By grade nine, a remarkable number of girls may be good at STEM subjects and interested in them,” he explained to GeekWire. “But if you study them, 80 percent or more have decided that they want to be a nurse or teacher — not a scientist.”

Enter a non-profit venture called GAMES Initiative. Northeastern — which arrived in Seattle in 2012 — partnered with its neighbor, the Institute of Systems Biology, and the National Girls Collaborative Project (NGCP) on a long-term plan to launch three free video games that will aim to engage middle school girls in STEM-related fields.

The hope is that the games will encourage students to pursue a career as a scientist, developer or engineer, for example. It’s a project unlike any Washburn has been involved in — but that’s exactly what makes him so excited about it.

“I’ve done a lot of movement stuff in my day and this is toward the top in terms of the passion and determination scale, from a variety of people,” he said.

The plan for GAMES, which will be funded by national grants, sponsorship money and charitable donations, is certainly robust. This year, the three organizations will work together with researchers and ask middle school girls for input on plot, characters, graphics, platforms and other related information.

That data will help spur the “game jam,” process, which will involve experts from the gaming community who will come up with 20 solid game ideas. Eventually, one company will be picked to develop and produce three games set for release in 2016.

If all goes according to plan, the buck won’t stop there. In addition to potentially producing even more games, the initiative calls for an online community for the girls who play the games — a place where those interested and inspired by their gaming experience can go to connect with their peers and also find more information about STEM-releated content. That way, the program ends up helping girls not only as they enter high school, but all the way through college and into the workplace.

“If the games are very popular, you can’t just stop there,” Washburn said. 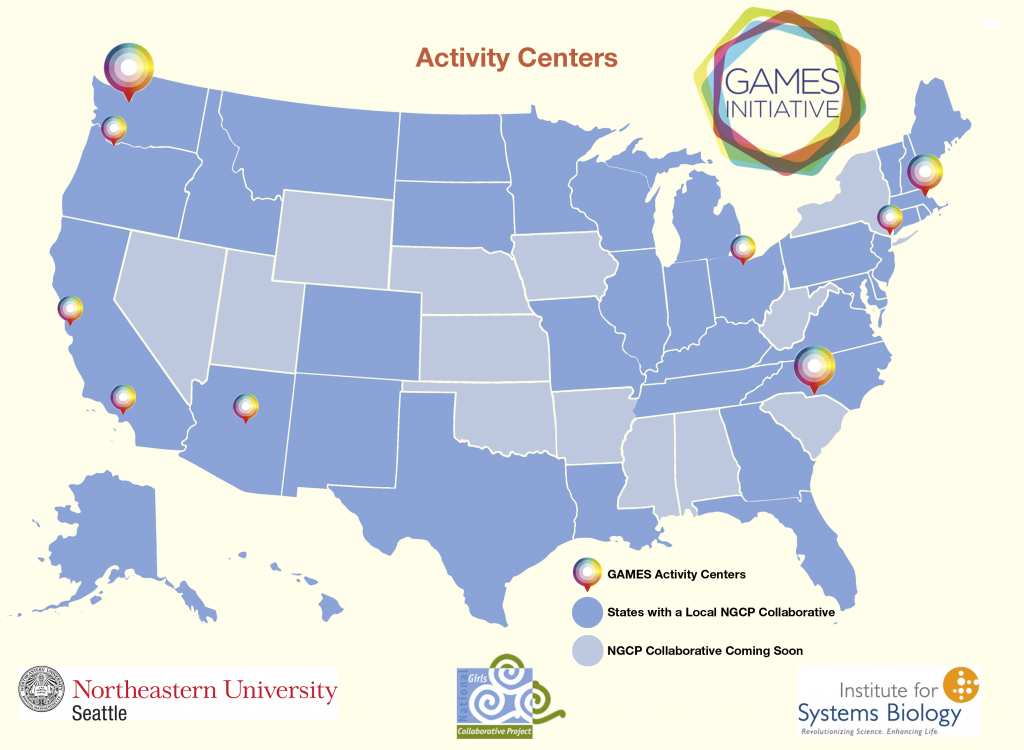 There are also plans to use data from GAMES to better understand exactly what’s keeping girls from pursuing STEM-related careers. The information and analytics will help the founders — and also everyone else — figure out what strategies work.

While this is not the first time people have tried to help more girls become involved with science and math, it is certainly unique in that the gaming medium is being used. Washburn said he first thought about this idea while working with the Washington Tech Industry Association long before his time at Northeastern, but was told that a non-profit couldn’t make a big impact on girls participating in STEM-related fields.

But after inviting speakers to Northeastern — which offers several gaming-related courses — who talked about the power of the “games for good,” concept, a lightbulb went off in Washburn’s head.

“It was clear that’s where the girls are and that’s how kids spend their time — gaming, and learning by doing,” he explained.

Still, though GAMES has the support of several industry experts and there is a detailed roadmap to success, Washburn said he is a little worried about what the next few years have in store.

“We’re in territory which has not been successful,” he said. “It’s kind of like Star Trek — we are not sure what’s out there.”

The project does already have a lot going on underneath the hood. There are hundreds of volunteers in place to support the initiative, from the fundraising space to the game jam process.

“Everyone is committed to the mission,” Washburn said.

Washburn also noted that while GAMES could probably be organized in any part of the country, Seattle is certainly a nice place to do it — especially considering the budding gaming scene in the city.

“The interest and hunger in this region for a product like this is ravenous Saturn V-like,” Washburn noted.

It is definitely an ambitious project, but GAMES could end up influencing a lot of young girls who may have otherwise brushed a STEM career aside for whatever reasons. Washburn admits that it will be difficult to change attitudes on a bevy of levels — “it’s deep-seeded,” he says — but he’s confident that there is a way to do so.