Many may know Seattle for its coffee, for the Space Needle, and — though slightly misinformed — the rain.

But another aspect of the Emerald City possibly overlooked is the budding gaming scene. From Microsoft to Valve all the way down to countless indie companies, Seattle is chock-full of developers and designers putting out title after title.

[Related: Advice from Valve co-founder Gabe Newell: ‘Don’t let publishers or platforms get in your way of success’]

Within the first few minutes of the discussion, Big Fish COO John Holland made it clear that Seattle is king when it comes to gaming.

“A lot of people like to think that Silicon Valley carries some of that weight, but the reality is that this is the epicenter of gaming, whether it’s casual or core or mobile or PC or console,” Holland said. “The community here is alive in spades. …There is no doubt that this is ground zero for games and will continue to be for a long time, thanks to the esteemed accomplishments of our colleagues.”

There are 16,500 employees working at nearly 300 game companies that have set up shop here, including Valve, Nintendo, Microsoft, 343 Industries, Big Fish, PopCap, Bungie, WildTangent, Z2, U4iA, and several more of which are ranked on the GeekWire 200, our monthly startup index tracking the Seattle region’s technology companies.

Seattle is also pumping out young talent, particularly from the nationally-recognized programs geared toward budding gamers at Redmond’s DigiPen University. There’s also Northeastern University, which recently set up a graduate school in downtown Seattle and will soon introduce a game design program.

Of course, you can’t forget that Seattle is home to the epic Penny Arcade Expo, better known as PAX, that attracts more than 70,000 gaming fans who come together to play anything from Super Mario on NES to Watch Dogs for Xbox One, hear from industry leaders on various panels and compete in tournaments.

Kiki Wolfkill, the executive producer at 343 Industries, added that the nature of Seattle as a city itself has helped it become a gaming kingpin.

“Seattle is a center for cultural arts and technology, and games is really about how those come together in a unique way,” she said.

Earlier this year, GameSpot produced a sweet video echoing several of these sentiments. And here are a couple cool infographics put together by the folks at Washington Interactive Network that demonstrate the size and influence of the Seattle gaming industry. 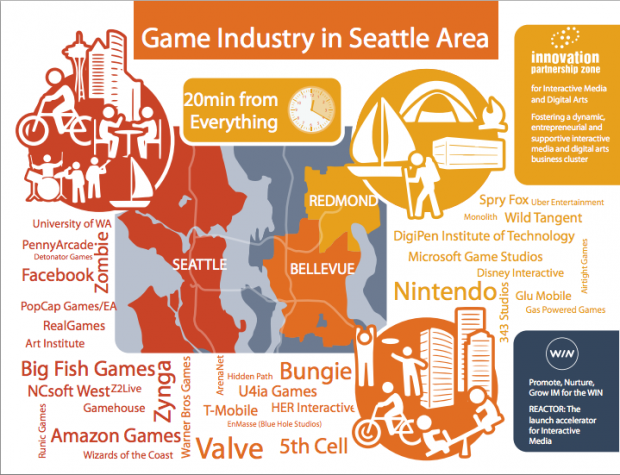 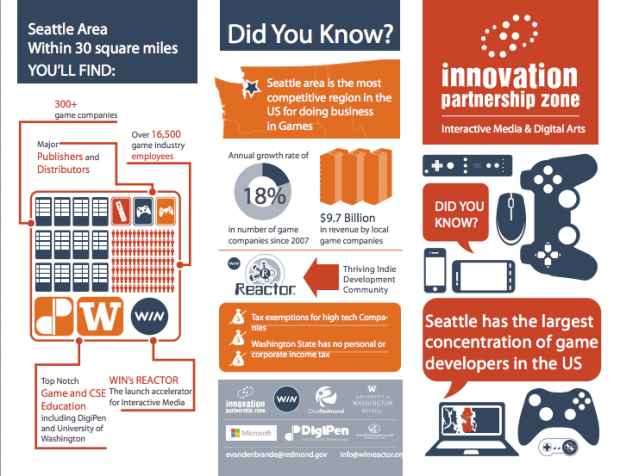