There’s a new online home improvement startup in town, and this one comes with an experienced tech executive at the helm and some serious deep-pocketed investors.

Former Digg CEO Matt Williams, who ran Seattle-based LiveBid.com from 1996 to 1999, when it was acquired by Amazon.com, has formed a new startup company by the name of Pro.com.

Operating stealthily for the past few months in an old Enterprise Rent-A-Car building in Seattle’s South Lake Union neighborhood, Pro.com and its 30 employees are looking to transform the way home owners find, book and schedule home improvement professionals, everyone from plumbers and painters to carpenters and ceiling fan installers

Users of Pro.com receive a so-called “Prestimate” — not to be confused with Zillow’s “Zestimate” home valuation service — that offers a real-time home improvement estimate for any project. (Williams says they’ve trademarked the word Prestimate and secured the domain name, noting that he does not anticipate any sort of legal problems with Zillow over the name).

A home owner using Pro.com could discover roughly how much it would cost to repair a roof, fix a leaky faucet and remodel the kitchen, finding the best person for the jobs based on their location. 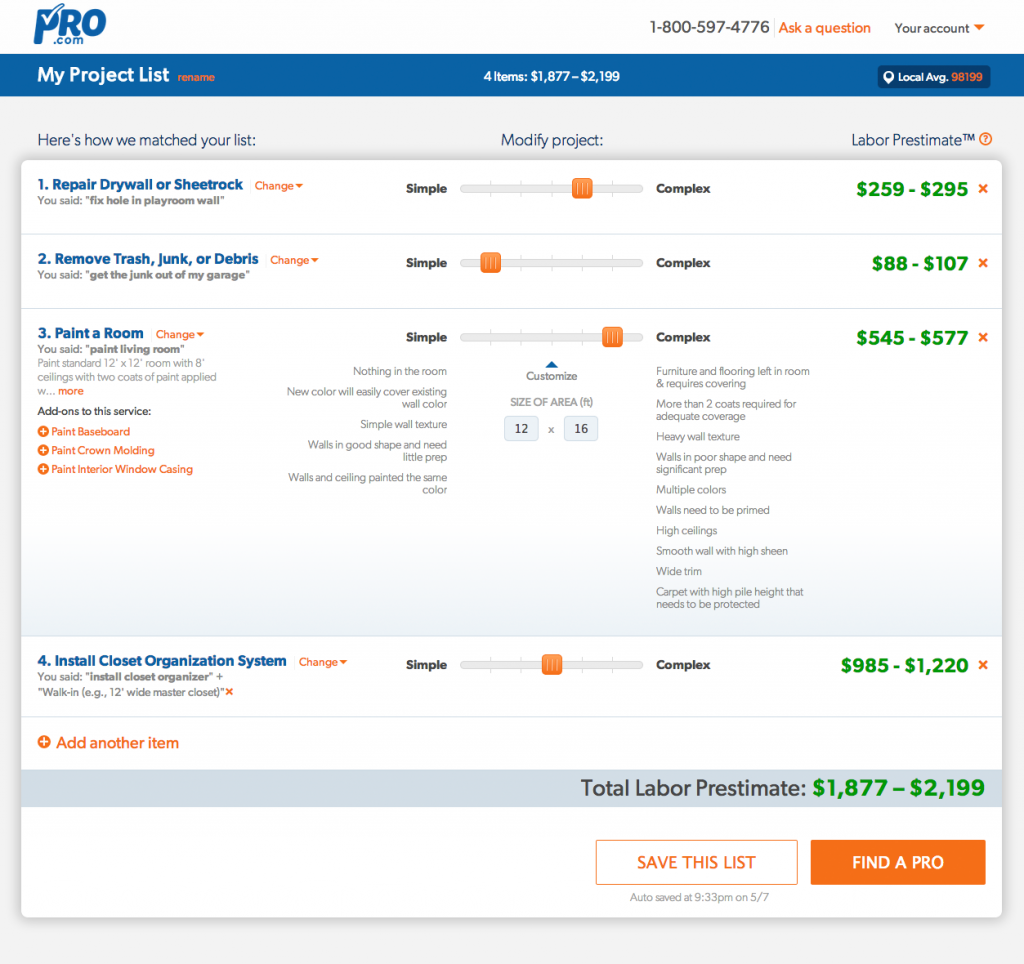 “Pro.com makes it simple to get a price estimate for your project in seconds and find a pro,” says Williams, who was previously serving as an entrepreneur-in-residence at Andreessen Horowitz. 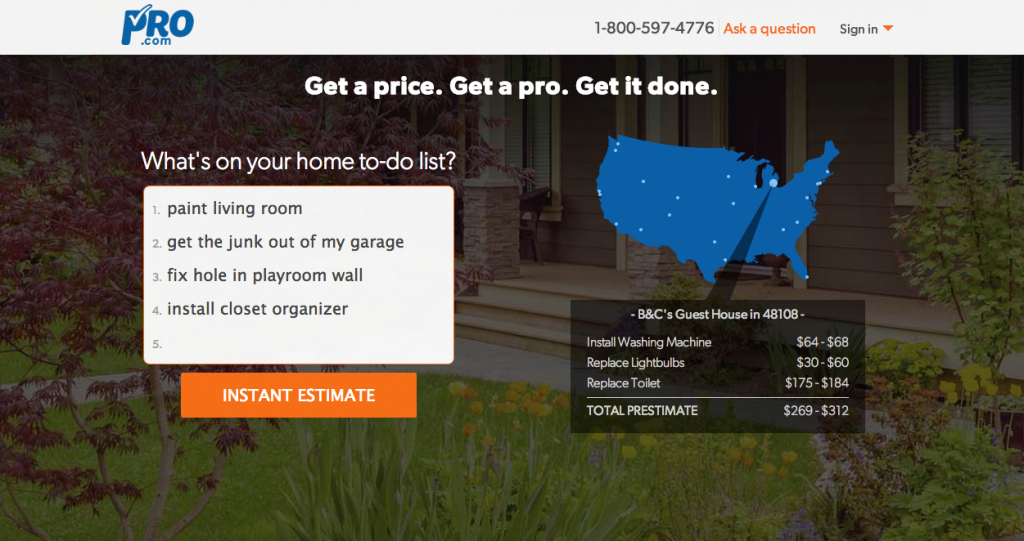 In that regard, Pro.com appears to be taking direct aim at services such as Angie’s List, HomeAdvisor and fast-growing Seattle startup Porch.com, which also touts a way to “find the right home professionals.” To a lesser extent, Zillow Digs and Houzz could be seen as competitive.

Williams said he respects Porch.com CEO Matt Ehrlichman, but added that the two companies are in a different space right now.

“We are much more transactionally focused,” he said. “We are really trying to solve the end-to-end problem of finding the most focused pro or set of pros for a given job, based upon a fairly detailed job list of what you are going for.”

In that regard, he said Pro.com is set up more as a commerce-oriented site. In fact, Pro.com plans to generate revenue by taking a percentage commission on each job it sends to one of its featured home professionals. It does not plan to take payment for listings, or charge consumers to access the information as Angie’s List does.

Also, unlike Yelp, Pro.com will not try to feature every contractor or house painter in a given market. Instead, it just wants to focus on the very best in any given market, though those professionals do receive a rating calculated by Pro.com.

Depending upon the city size, Williams said that each market would ideally have between 10 and 70 featured home improvement specialists, all fully vetted by Pro.com staffers.

About 40 service providers are currently listed in the Seattle area, the company’s most mature market. The company actually launched quietly under the domain SeattleHomePro.com about six months ago, collecting valuable information from customers and professionals alike. But that site will phase out as all efforts are placed fully on Pro.com.

In some instances, home professionals in the Seattle area on that site have dozens of reviews, with Williams and his team doing the heavy lifting of directly soliciting customer feedback.

He declined to go into detail about the company’s next markets. But Williams said the company will offer a “Pro Report” to customers in every major U.S. city that’s designed to “do your homework for you” in terms of finding the best home improvement professionals for the job.

A native of Seattle, Williams spent a good chunk of his career at Amazon running various units, even shadowing Bezos for a short spell. The 41-year-old said he’s thrilled to be “back in the mix” of running his own company, saying he always intended build his next venture in his hometown of Seattle.

“I have very deep roots in Seattle,” said Williams, who attended Shorecrest high school and whose father started the radio station KUBE 93.3 FM. “This is where I call home.”

At Andreessen Horowitz, Williams interacted with dozens of entrepreneurs who were working on various business concepts. He settled on Pro.com and initially the home improvement category because it reminded him of Amazon.

“I truly believe that this is one of those opportunities that I look at the early days of Amazon and say this has the makings for a gargantuan industry,” he said. “Someone will take and make each of these verticals incredibly easy to price, book and pay.”

Like at Amazon, Williams touts an intent focus on the customer, perhaps one of the reasons why his team is filled with ex-Amazon employees.

“If you look at it from the early days of e-commerce, and what Amazon accomplished by taking a beachhead and building out that beachhead, and creating a phenomenal customer experience around the information serving e-commerce, I think that there is an opportunity to do the same thing in local services,” he said.

And while Pro.com is starting in the $300 billion home improvement arena, it’s easy to see that Williams has bigger plans in store.

Asked whether the Pro.com concept could apply to other local service providers — say for instance in the automotive industry — Williams said “absolutely.”

“We have a vision to be able to make local services accessible … in pricing, accessible in booking and accessible in payment across verticals well beyond home improvement,” he said.