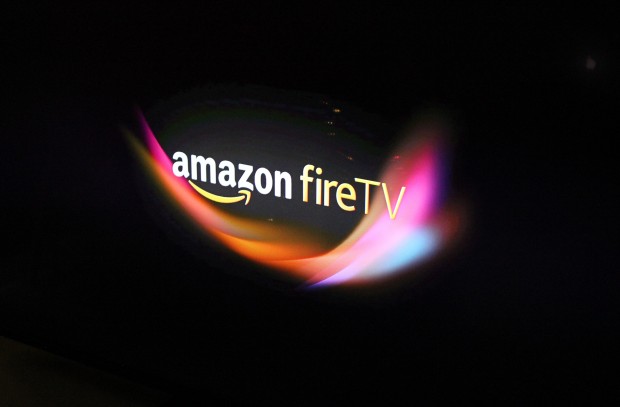 A few members of team GeekWire stayed late at the office on Thursday to set up and run Amazon’s Fire TV set-top box, getting some hands-on time with the Seattle company’s entrant into the increasingly crowded market for streaming living-room devices. 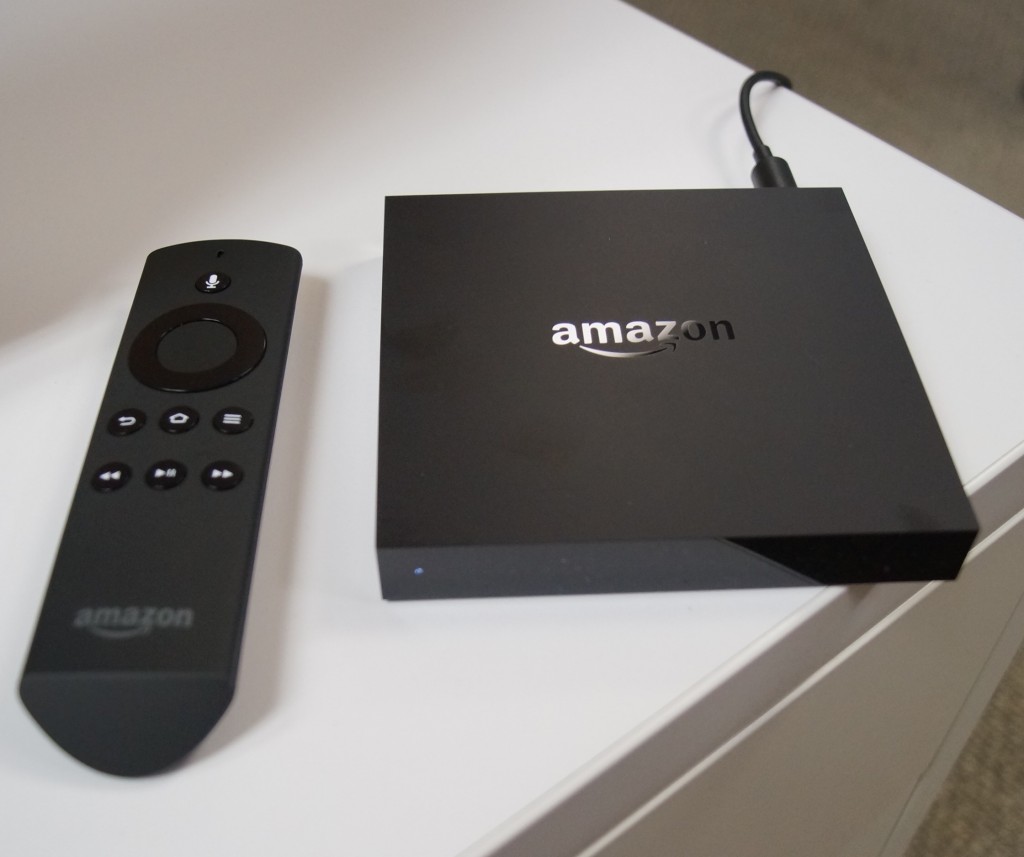 We came away impressed with some elements of the product, and underwhelmed by others. Amazon faces no shortage of competition in this market, from Roku and Chromecast to smart televisions with their own built-in apps. But especially for existing Amazon Prime subscribers who haven’t already taken the plunge with another device, the $99 Fire TV is worth a close look.

Here’s quick rundown of some of the things that stood out during our first couple hours with the Fire TV at GeekWire HQ.

HDMI Cable: We were thrown for a loop by the lack of an included HDMI cable, which sent us on an unexpected trip to the store before we could fire up Amazon’s box. The product page notes that the cable isn’t included, with the ability to check a box to add it to your order, but we had overlooked that when we made our purchase. So if you don’t have an HDMI cable on hand, be forewarned.

Navigation: Moving through the grid-based menus to find different forms of content is easy and straightforward, using either the remote or the game controller. The interface was fast and smooth. Fast-forwarding through movies was also quick and easy. 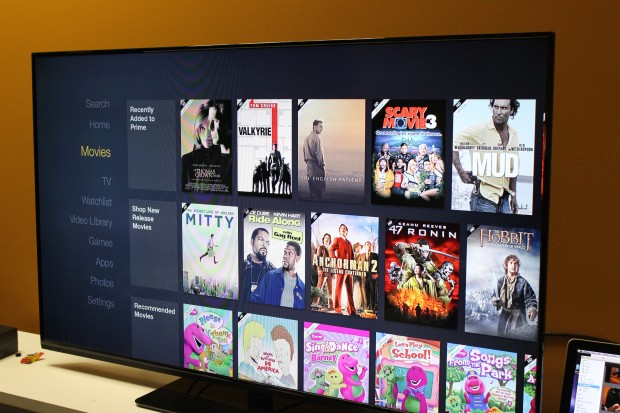 Game Controller: The controller hardware is less than impressive, with joysticks that feel just a little too flimsy, and a shape that’s reminiscent of the original Xbox controller. But it’s functional, and the extra navigation buttons will be very familiar to Android users. The inclusion of dedicated media control buttons is also a nice touch. Using the controller to navigate will feel strangely comfortable for many people, given how accustomed we’ve become to finding our way around our game consoles in that way. 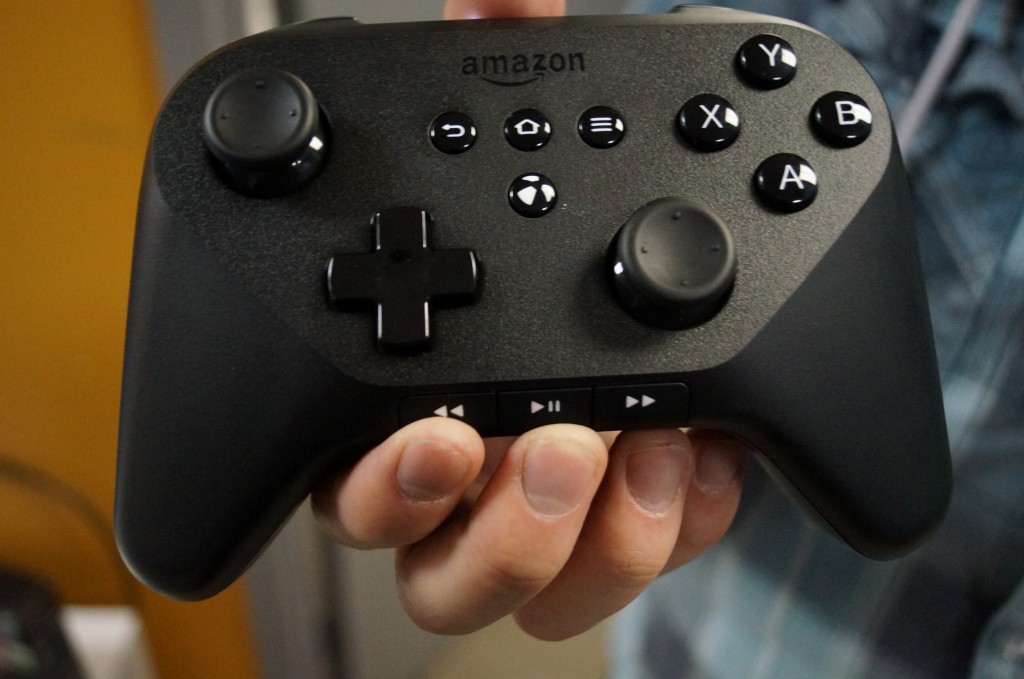 Voice commands: The built-in microphone in the remote control worked well in recognizing what we were saying, and grabbing relevant content. A voice search for Tom Hanks brought up seemingly every movie ever starring the actor, for example. Our attempts to use the voice commands for system controls — such as “restart” — were unsuccessful. A logical feature for Amazon to add.

It took a bit of time to learn the technique for the voice commands. You press the mic button on the remote and hold while you talk, let go, and then press the separate navigation button to select the word or phrase that appears on screen, confirming what you said. Seems like that’s one too many steps. But we got the hang of it after a couple tries, and it works well in practice. 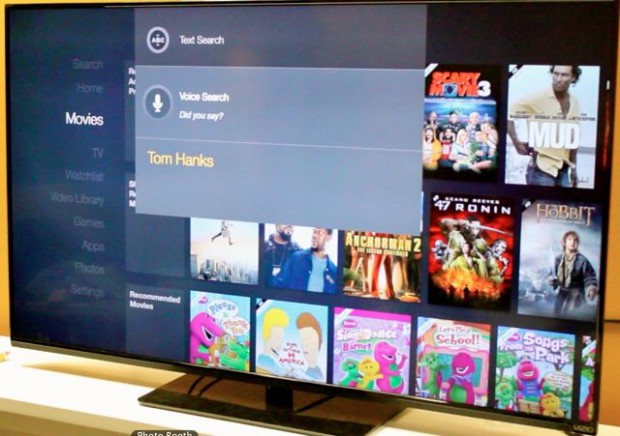 Apps: So far, we’ve tried the Watch ESPN, Pandora and Bloomberg TV apps, and all of them are solid. Bloomberg provides content including a 24-hour live stream of Bloomberg TV, but your level of access to ESPN will depend on your cable package. Netflix is next on our agenda, but unfortunately we couldn’t remember our Netflix logon when we were testing it last night. We’ll try again.

Logins and Passwords: That brings us to one of the challenges of these streaming boxes— the fact that you have to remember and accurately enter your logins and passwords for many of these apps. At times it can be a “serious pain in the ass,” to quote one member of the GeekWire team, after entering yet another login and password for an app.

Here’s where Amazon has an advantage: The Fire TV is preregistered to the purchaser’s Amazon account. When we logged in, for example, all of my previously purchased Amazon Instant Videos were right there waiting in the video library. Even though Netflix and other competing services are included as apps, content from Amazon feels native to the Fire TV experience.

Video Games: This is not an Xbox or PS4 killer, as you will see from our initial reactions to Amazon’s “Sev Zero” first-person shooter. The graphics in NBA 2K14 were less than impressive. But for casual games, the Fire TV is more than adequate. We were immediately sucked in by “Badland,” the popular side-scrolling game on Android and iOS that plays very well on the big screen with Fire TV.

Those are a few of our initial impressions with the Fire TV. We’ve got a lot more to try, and we’ll continue to post our impressions as we settle in with Amazon’s new box.