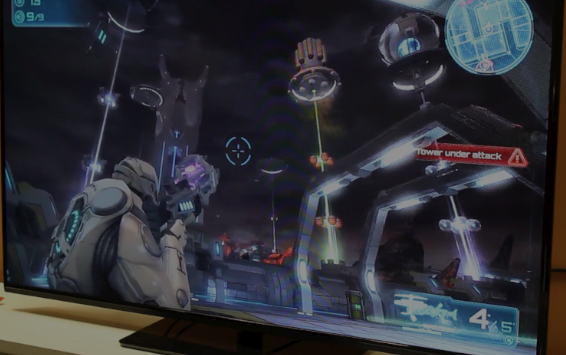 GeekWire’s Amazon Fire TV arrived on Thursday, and we’ve been doing some in-depth product testing at the GeekWire Labs. 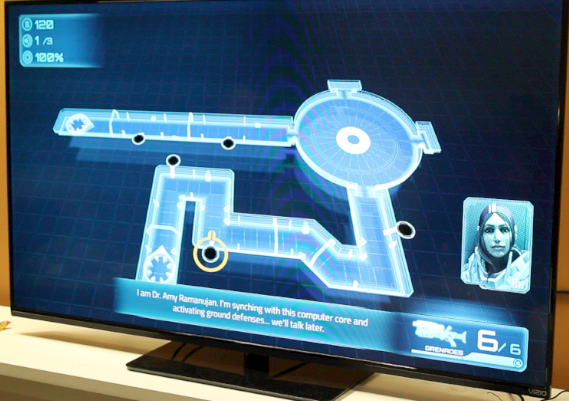 After checking out the solid ESPN and Bloomberg TV apps, we dove into “Sev Zero,” the first-person shooter created by Amazon Game Studios, which normally sells for $7 but comes for free with the Fire TV’s game controller.

At first, the similarities to Microsoft’s Halo franchise seemed incidental, but after a while we were expecting to see an “Inspired by Bungie” credit on the screen. From the color scheme to the graphics to the weapons, it’s hard not to see this as a Halo wannabe.

Watch the video below for our initial reactions to this flagship Fire TV game.

What’s with the scrolling text introduction? Sophisticated animations have become the norm for games on the television screen, and Amazon makes us read multiple pages of text to understand the storyline. It’s truly the Kindle of video games.

The gameplay is decent, but not on the level of a higher-priced console game. But hey, at $7 (or free), how much can you expect? We had fun with more casual games on the Kindle, including the great Badland. And it’s great to see NBA 2K14 in the games store, although the graphics are definitely not on the level of the Xbox One or the PlayStation 4.

In case there was any doubt, the Fire TV is not yet a serious alternative for hard-core console gamers, at least not based on our initial experience with Amazon’s new first-person shooter.

We’ll have more on our initial experiences with the Fire TV in upcoming posts.

GeekWire’s Taylor Soper and John Cook contributed to this post.