Amazon and Google may have received all the attention so far with their drone delivery plans, but it’s actually a long-standing traditional logistics company that is shipping goods via unmanned aircraft right now.

DHL announced today that will use drones to deliver medications and other “urgently-needed goods” to remote German islands in the North Sea this week as part of a pilot project. The company noted that this marks the first drone flight in Europe operating “outside of the pilot’s field of vision in a real-life mission.” 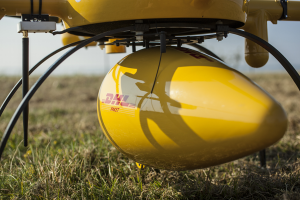 The drones will fly on a 7.5-mile stretch at an altitude of 50 meters and a top speed of 18 meters per second. DHL, which gained approval from air traffic authorities for the pilot project, will monitor the drones from a ground station.

DHL noted that this is still a test and the company isn’t planning on using drones for normal deliveries quite yet.

“This phase of the research project will test and evaluate the possibilities of such delivery methods,” the company said. “To the extent that it is technically feasible and economically sensible, the use of parcelcopters to deliver urgently needed goods to thinly populated or remote areas or in emergencies is an interesting option for the future.”

Both Amazon and Google have announced their intentions for drone delivery, but neither company has actually used the devices in real-world applications.

Read more details about DHL’s drone deliveries here, or check out this video to learn more.