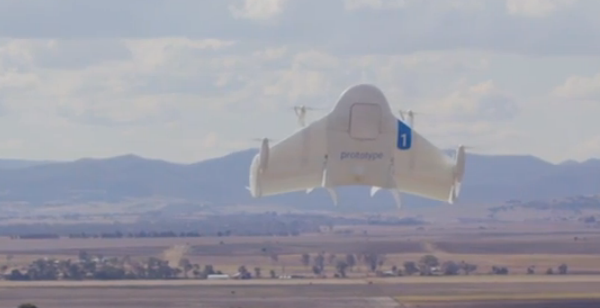 As it turns out, Amazon isn’t the only major internet company that plans to provide drone delivery. Google has been working on developing its own fleet of flying package delivery drones for the past two years, the company revealed today with an article in The Atlantic.

Codenamed Project Wing, the initiative is being run out of the company’s Google X office in Mountain View, Calif. The office, which is also responsible for the company’s self-driving car initiative, Google Glass and a host of other “moonshot” projects, has been hard at work figuring out a way to use autonomous drones to drop off packages in an urban environment. Right now, Google is currently running small-scale tests in Australia to further refine the drone systems.

Unlike Amazon’s drones, which hover like helicopters using several rotors, Google’s model, code named “Chickadee,” takes off and lands vertically, but flies horizontally using a variety of sensors. The company said that it isn’t married to the design, but it’s what they’re using to test the program right now. Here’s a video of a test flight:

The Chickadee is designed to hover over a target and then lower a package to the ground on a fishing line, before dropping it off, retracting the tether and flying away. It’s another marked difference from Amazon’s drone delivery demo, which showed its vehicle hovering over a deck before dropping off a package.

Amazon announced its foray into drone delivery, named Prime Air, late last year. The company has recently petitioned the U.S. Federal Aviation Administration to allow it to test its package-delivering robots at an airfield near Seattle, and said it’s testing its 8th and 9th generation of aircraft.

Google’s entry into the drone delivery market may actually be good news for Amazon. In order to start using drones for package delivery in the U.S., companies will need regulations allowing their use. It’s not clear yet if Amazon and Google plan to pool their efforts, or if the two companies want the same regulations, but having more big players in the drone space should motivate the FAA to act sooner rather than later.