Who needs the headaches and troubles of an initial public offering when venture capital investors are able to step up with huge financing rounds?

Apparently some big names in technology, including Airbnb, Uber, Houzz, Jawbone, Nutanix and 35 other large tech companies which have chosen private financing over the public markets.

According to a report out Tuesday morning from CB Insights, there are now 40 technology companies valued at more than $1 billion, up from 25 which were in the billion-dollar club last year.

The growth of this club comes as more dollars flow from private sources, and big tech companies attempt to navigate the turbulence of the IPO market. (Take enterprise software company Box, as an example). 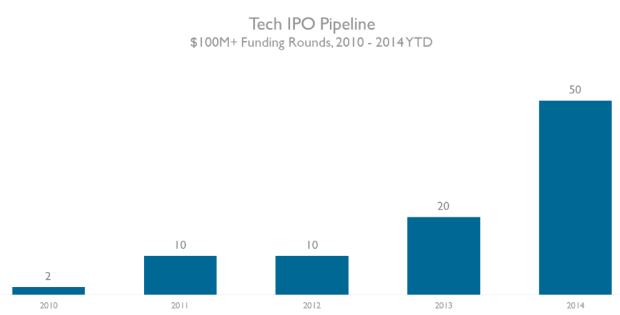 In fact, the number of venture capital financing rounds that topped $100 million more than doubled in 2014 to 50. The report from CB Insights indicates that there are now 588 tech companies in what it describes as the IPO Pipeline — determined by having valuations (real or rumored) of $100 million or more.

Of course, not all of those companies will make it to the public markets. Some will stay private, while others will be acquired.

Even so, the backlog indicates that, at some point, IPOs will be in the cards for many companies. And the IPO market is strong right now. So far this year, 271 U.S. companies — across all sectors — have priced public offerings. That’s up from 221 last year and 128 in 2012, according to Renaissance Capital.

Just one company with Seattle roots makes the billion-dollar club list: Electronic signature powerhouse DocuSign. The company, which was started in Seattle and maintains a large engineering office in the area, raised $115 million earlier this year and is rumored to be on the IPO path. (Seattle-based Juno Therapeutics, which has raised more than $300 million and is angling to go public this year, is not included in the list since it is in the biotech category).

Kleiner Perkins, Accel, Sequoia and Andreessen Horowitz had the most companies in the list. And California, not surprisingly, leads all states with over half of all pipeline companies. Washington boasts 16 companies on the list, including tech companies such as Apptio, INRIX, Redfin and Avvo. Oregon shows eight companies, including Urban Airship, Puppet Labs and Act-On Software.