Coupang, South Korea’s largest online retailer, has raised $300 million in private equity to fend off Amazon’s entrance into the market, which is expected this year.

To date, the company, which was founded by Harvard Business School dropout Bom Kim four years ago, has raised $480 million, valuing the company close to $2 billion, according to Bloomberg, which quoted people familiar with the deal.

BlackRock Private Equity Partners led the round and Wellington Management Company, Greenoaks Capital Management and Rose Park Advisors also participated. The round will give the company a sizable war chest — around $500 million in cash, to be precise — to prepare for Amazon’s arrival in the country, which is expected this year, according to a report by a Korean newspaper.

An Amazon spokesperson did not immediately respond to inquiries asking about its plans there.

In addition to strengthening its leading position in Korea, Coupang said in a press release today, it also intends on using the cash to bolster its presence in a number of markets, including Silicon Valley, Seattle, Shanghai and Seoul.

It said it will be opening offices in those markets, with a focus on engineering and R&D. What’s interesting about the Seattle location, of course, is its proximity to Amazon, among other retailers, including global giants like Alibaba, which also recently opened up a satellite office here.

We’ve reached out to Coupang to learn more, but it still appears to be early days. For instance, a LinkedIn search reveals only one Seattle employee, who has been working at the company for four months. Prior to joining Coupang, that person worked at Amazon in the merchandising tools division and as a senior buyer. 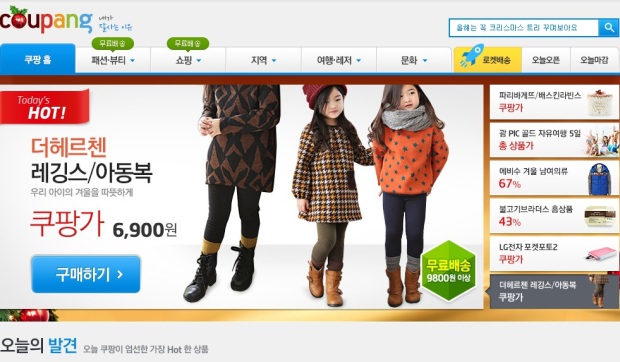 Coupang claims to be the premier online destination in Korea, offering a broad selection of products, ranging from winter coats to camcorders to food and to beauty products. The company initially launched as a daily deals site.

In an interview with Forbes, Kim, who is Coupang’s founder and CEO, did not hesitate to name Amazon when talking about his aspirations. “We want to be the Amazon of Korea,” he said. “We are the largest online retailer here, and we’re one of the most well-funded tech companies in Korea.”

Coupang currently has more than 20 million subscribers and 1,500 employees. In 2013, Coupang said annual gross merchandise value exceeded $1 billion, and that the company is currently operating at an annualized run rate of over $2.2 billion.

In addition to being a retailer, Coupang has one of the largest online fulfillment operations in Korea, and has a home-grown fleet of drivers that can provide same-day delivery around the country.