GeekWire didn’t actually make it into the heart Alibaba’s secretive engineering office in downtown Seattle during our unannounced visit this afternoon. But we did make it as far as the third-floor lobby and get a few basic details before being politely sent back down to the street. 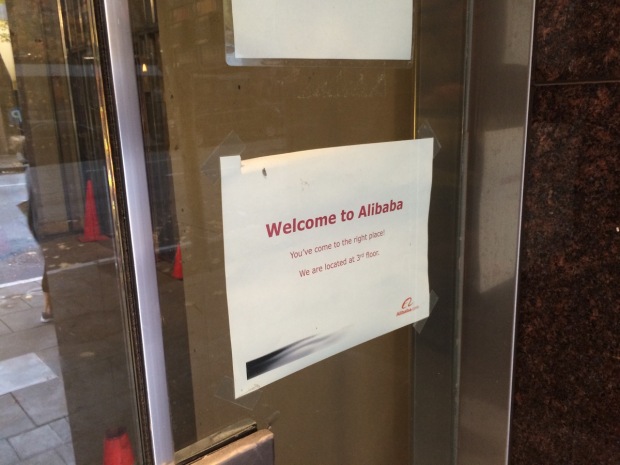 The Chinese e-commerce company, fresh off its blockbuster IPO on the New York Stock Exchange, has put down roots in downtown Seattle with a new office just down the street from the giant complex under construction for its rival, Amazon.

The new Alibaba office is, in fact, an engineering center, according to the Alibaba employee who came out to talk with us in the lobby. However, it’s still under construction, and the company is still in the process of recruiting many of the engineers who will work there. Our request for a tour of the space was politely declined.

GeekWire broke the news in July about Alibaba’s plans to open a Seattle office, which is only its second in the U.S., after its existing Silicon Valley location. At the time, however, the company declined to provide any specifics, so even the location of the space remained a mystery.

The Puget Sound Business Journal today reported the location, in the Decatur office building on Sixth Avenue in the heart of Seattle’s retail core, where Alibaba is leasing 8,000 square feet inside the offices of Synapse Product Development.

The location of the initial office is notable in part because of the proximity to Amazon’s South Lake Union headquarters. It’s even closer to the three-block complex being developed for the Seattle e-commerce giant on the northern edge of downtown Seattle. Amazon employees would be fertile recruiting targets for Alibaba as it gets up and running.

We’ve asked an Alibaba spokeswoman for more about the company’s plans in the Seattle region, and we’ll update this post with any additional information we receive.