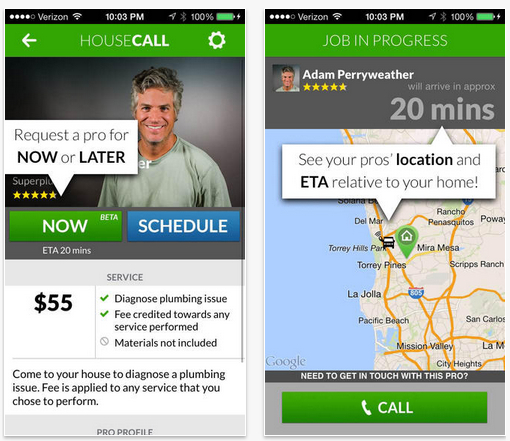 Home owners should have little trouble these days finding plumbers, house painters and other service providers to work on their home projects.

That’s because there is no shortage of new online marketplaces that look to connect home owners with professionals. And here comes another: It’s called HouseCall.

In addition to traditional players such as HomeAdvisor and Angie’s List, a new breed of companies are looking to attack the home improvement market with a mobile-first approach. That appears to the approach of HouseCall, which is most closely competitive with Pro.com. In fact, the descriptions of the two companies appear to be nearly identical.

“It’s hard for homeowners to find a pro they can trust to fix a leaky faucet, repair a window or simply clean their house,” said cofounder Roland Ligtenberg in an email to GeekWire. “Our mission is to make this process easier. Add convenience to finding and booking. Add trust to the entire process. Add transparency to pricing. We know there’s a huge need for our service because it’s reflected in the loyalty of our early customers.”

HouseCall previously raised $1.5 million, including cash from e.ventures, one of the original backers of Angie’s List. It appears to be off to a fast start, claiming thousands of users in the San Diego area who use the iPhone app to pick from a list of more than 100 service providers, all of which are “hand-vetted.”

“Our numbers are killer. Of people who book us a first time — about 35 percent have already used us a second time or more,” said Ligtenberg, adding that some service providers are now getting more than 50 percent of their business via the app. It plans to begin launching into new markets this summer.

The company was founded in late 2013, about the time that former Digg CEO and ex-Amazon exec Matt Williams started accelerating efforts at Pro.com.

This could be a very interesting battle to watch.