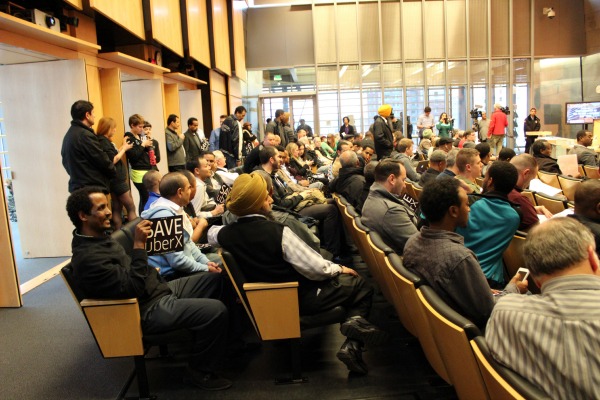 We’re here at City Hall along with hundreds others as the Seattle City Council’s Committee for Taxi, For-hire, and Limousine Regulations prepares to vote on regulations that would cap the number of total UberX, Lyft and Sidecar drivers in the city to 300.

A debate has been raging in the city in recent weeks over whether the new breed of companies like UberX and Lyft — which allow customers to request a ride via a smartphone and automatically pay for fares without using cash — should be able to operate in the city.

Many, including those in the tech industry, argue that these companies offer a more innovative and convenient alternative to traditional taxi cabs, and that the city should not regulate them. Others, especially those in the taxi and for-hire industry, say that the new services should be regulated or curtailed, and that they should not get a free pass on regulations simply because they utilize new methods for attracting riders.

The biggest concern from both Mayor Ed Murray and the committee appears to be uncertainty about insurance coverage. I’m sure we’ll hear discussion on that end today.

The meeting is set to being at 4 p.m. It’s standing room only here in the Council Chamber, evenly split between those supporting the taxi/for-hire industry and the transportation startups. Many from the taxi industry have signs that read “keep the cap,” and simply “300.”

There will be 20 minutes of public comment to start the meeting, followed by 90 minutes of committee discussion.

My gut feeling is that there actually won’t be a vote today. The committee has delayed this process for months now — it was supposed to vote on the ordinance two weeks ago — and now sure if they have enough to make a decision yet.

Follow along with our live blog here and feel free to add your comments below. I’ve also embedded the live stream here: