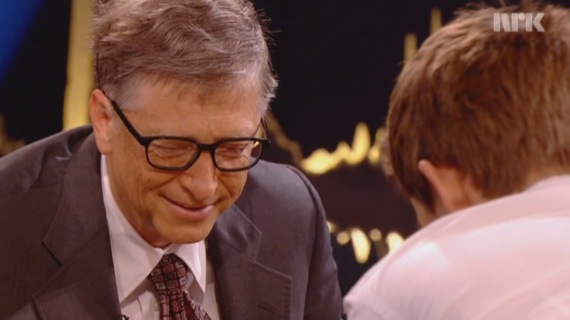 It seems like Bill Gates has been having a lot of fun on late night talk shows these days. First there was his appearance on Jimmy Fallon (complete with viral video), and now he’s taken to Norway’s airwaves.

This time around, instead of a manufactured viral video, Gates squared off against world chess champion Magnus Carlsen in an exhibition match. Gates was even given a handicap: he had 2 minutes to make his moves, while Carlsen was kept to 30 seconds. If he managed to keep Carlsen from checkmating him until the clock ran down, Gates would have won. Here’s how it all played out:

Carlsen demolished Gates, clearly putting the Microsoft co-founder on his back foot. If you look closely, the 23-year-old Carlsen actually baited Gates into making his fatal blunder, loading up the right side of Gates’s board with both of Carlsen’s bishops. That tempted Gates into moving his far-right pawn up to threaten Carlsen’s bishops, allowing the Norwegian grandmaster to pull off a quick checkmate.

At the end of the game, Carlsen had 18 seconds left on his clock, while Gates had burned through a full 50 seconds choosing his moves.