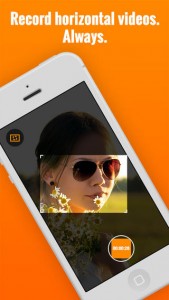 We all have that friend who loves taking videos with an iPhone or iPad but insists on holding it vertically, rather than horizontally.

Then, when they inevitably end up sharing it to Facebook or YouTube, everyone else is stuck staring at this awkwardly letterboxed video.

Or, worse still, someone ends up recording a video with the device held horizontally, but it still thinks it’s being held vertically, so they end up with a letterboxed vertical video that can only be properly viewed if the screen itself is rotated 90 degrees.

Horizon aims to fix that by editing the footage a user shoots on an iPhone or iPad to only take video in a proper horizontal aspect ratio. Here’s a video that shows how it all works:

Horizon has two modes for users to choose from. The first uses a fixed-size frame that rotates according to the phone’s orientation, while the second also scales the size of the frame to match the angle at which someone is holding their phone. 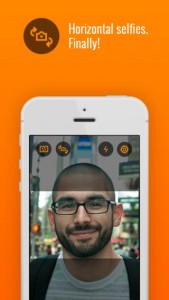 The end result is an always-horizontal video that will never be letterboxed. Users can set Horizon up to save directly to their phone’s Camera Roll, or export direct to other services like Facebook and Instagram.

Even for users who don’t necessarily have a problem keeping the phone horizontal while taking videos, Horizon serves a purpose. Because it uses the sensors in a user’s iPhone to maintain a horizontal image, it also means that tilting the phone slightly from one side to another is less pronounced in the resulting video, making the end result feel smoother.

For users with exceptionally steady hands, it’s also possible to use Horizon’s rotate and scale functionality as a real-time digital zoom. By rotating their iPhone from vertical to horizontal (or vice versa) they’ll end up widening or narrowing the frame of the video. While the change is fairly imperceptible when someone’s trying to hold their phone straight, intentionally using it creates a neat effect.

The one drawback to Horizon’s approach is that people who don’t hold their phones horizontally will actually end up losing a lot of image data, just because Horizon ends up cropping out a ton of the frame in its pursuit of creating a horizontal video.

Horizon is available for 99 cents in the iOS App Store.