The NFL, Under Armour, and GE today announced the next batch of winners for its Head Health Challenge, a $60 million initiative that gives research teams funding to develop new ways to prevent, measure, and detect brain injury.

The seven awardees each won $500,000, with a chance to receive an additional $1 million in 2015. They range from a Detroit company developing material that improves the safety of synthetic turf fields, to Vicis, a University of Washington spinout we wrote about on Wednesday that is designing the “world’s safest football helmet.”

This is the second leg of the challenge, which launched last year and is part of a four-year R&D program. The first group was picked in January, with those projects related to diagnosis and treatment of brain injury. The second class is more focused on protection and measuring head impacts.

Up to five teams from this second group will have a chance to win an extra $1 million next year, depending upon what the organizers deem as “continued innovation advancements, potential for commercialization and on-field impact.” 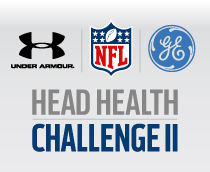 A concussion crisis is impacting American football at all levels. One out of every three retired NFL players is expected to develop long-term cognitive problems; doctors are criticizing the NCAA for how it protects student-athletes from head trauma; and parents — from LeBron James to Brett Favre — are skeptical of allowing their children to play football due to safety concerns.

It’s a pressing problem for the NFL, which was sued last year by former players who were suffering from brain injuries and blamed the NFL for hiding the dangers of head trauma. The league reached a tentative settlement with the players in August 2013, but a federal judge lifted a $765 million cap on damages just three months ago.

The winners are listed below. There are also videos about each group you can watch here.