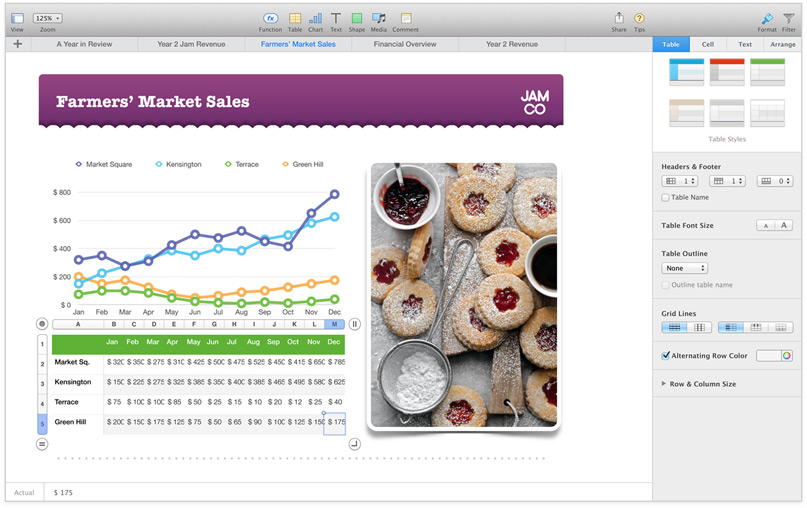 Apple issued a number of updates to its iWork suite of productivity apps today, in a move that added some key functionality for competing with Microsoft Office.

The new updates have filled in a few missing features, including improved compatibility with importing documents from Office 2013, so that it’s easier for users of Apple’s suite to open up files produced by Office and have them maintain their formatting and composition. All three of the apps also got the ability to export files as password-protected Office documents, so that it’s possible for users to share sensitive information with their Windows counterparts.

Numbers, Apple’s spreadsheet program, has gotten all of its AppleScript support back, something that users had been missing since its upgrade in October. Until today’s update, Excel was the only option for spreadsheet users who wanted to automate tasks using Apple’s venerable scripting language.

iWork for iCloud, Apple’s web-based document collaboration service, also gained the ability to password-protect documents, which means that it’s fairly easy for users to now share a secured document that can be edited in the cloud.

On top of all of that, each app in Apple’s suite got a number of smaller updates, including the ability to set keyboard shortcuts for paragraph styles in Pages and new transitions in Keynote, iWork’s presentation software.

All told, the updates fit with Apple’s past assertion that the company would be working hard to improve its productivity suite, which the company started offering for free to anyone who buys a new iOS device or Mac. At the time of Apple’s pricing announcement, Microsoft seemed confident that the change wouldn’t affect adoption of Office on the Mac or on mobile.

Still, it’s clear that Apple wants iWork users to be able to interface as seamlessly as possible with their Office-using counterparts. While Microsoft has said that they aren’t scared, the company recently announced a program that would give students free access to Office 365 while they were enrolled at an institution that uses Office ProPlus or Instructional Plus.

That points to a company that’s concerned a generation of Mac-toting college students will feel that they can have a productive work life without Office, and bring that same mindset with them into the workplace, where Microsoft has traditionally been more dominant.

The iWork suites are available on the Mac and iOS App Stores. To access the new iWork in iCloud features, visit iCloud.com.