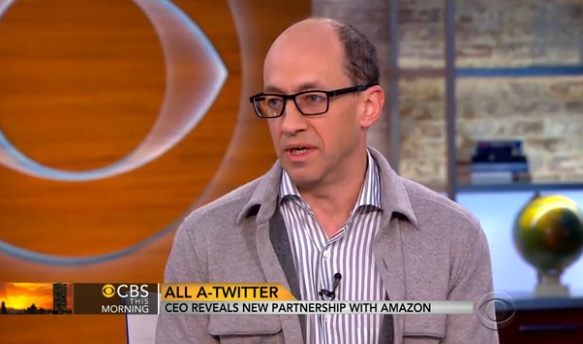 Amazon will not be sharing revenue with Twitter when a person adds an item to his or her shopping cart from the microblogging service.

The new program, called #AmazonCart, allows customers to quickly add products to their Amazon shopping cart while they use Twitter.

But an Amazon spokeswoman told GeekWire this morning that Twitter is not receiving revenue when people add an item to their cart. Likewise, revenue will not be passed along to Twitter after the person finalizes the purchase from his or her cart.

Twitter has been looking for a way to enable commerce on its platform, and other companies have built several shopping platforms on the social platform, but this apparently won’t be the social media giant’s big payday.

The lack of revenue, however, didn’t keep Twitter’s CEO Dick Costolo from using the Amazon announcement as an example of how it will keep users attracted to its platform on CBS News This Morning, where he referred to the #AmazonCart program as “in-the-moment commerce.”

“That notion of seeing something that someone talks about, and saying I want to put that in my Amazon cart, you can do that now with in-the-moment commerce,” Costolo said.

Amazon users will have to link their account to their Twitter profile in order to enable the service, and items you reserve in your cart will not be fully purchased until you review your shopping cart.

Going forward, we may see more people embedding Amazon links in their tweets if the hashtag catches on. Amazon spokeswoman Julie Law said there’s already a lot of behavior to warrant a service like this on Twitter.

“I can also tell you that third-party companies and many individuals that sell their products on Amazon already use Twitter to promote their products,” she said. “Twitter is a great place for product discovery and so we created #AmazonCart to serve and encourage this behavior that already exists. We want customers to be able to add products to their cart now without leaving Twitter.”

Amazon is already promoting #AmazonCart through its own Twitter feed, like with this Amazon deal on the Avocado saver.

Save the avocados! http://t.co/YHCphTmLPB Reply w/ #AmazonCart to add the Avocado Saver to your Cart pic.twitter.com/C9sKbCB1Xv

Amazon declined to say if the program would launch soon on other sites, like Facebook, and confirmed it is not working with other third-party technology companies, like Portland-based Chirpify, to enable this feature.