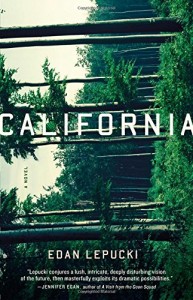 Amazon calls Edan Lepucki’s new book California one of the “best books of July,” but the highly anticipated novel about a post-apocalyptic world has been caught in a real-life battle.

Lepucki finds herself in the cross fire between Amazon and her publishing house Hachette, which have been in a contract dispute for months now. As a bargaining tactic, Amazon has been delaying shipments of some books, and in the case of Lepucki, refusing to make the title available for pre-order.

Given the lengths that Amazon has gone to play hardball with Hachette, it’s puzzling why Amazon’s editorial team thought it was a good idea to promote the title as a top pick of the month. The title is “currently unavailable” for pre-order before it starts shipping on July 7. Additionally, there’s no Kindle link on the book’s product page, GigaOm reports.

Amazon named my book a best book of the month. But you still can’t pre-order it there. (Thanks to @knguyen for the thoughtful write-up!) 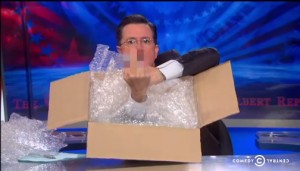 But an Amazon spokeswoman says “Amazon’s editorial team chooses their book recommendations independent of other teams.”

She added that California will be available for customers to order on July 8.

Since Amazon is responsible for so many book sales, the lack of pre-orders can obviously hurt the chances of a good book launch.

That’s where another Hachette author Stephen Colbert of The Colbert Report stepped in, attempting to give Lepucki what he called “the Colbert bump.” In a segment last month, he compared Jeff Bezos to the villain in Harry Potter, and gave Amazon the middle finger through a packaging box. He also told viewers to pre-order Lepucki’s novel on Portland-based Powell’s website.

The bump seems to be working. As of today, the hardback was the no. 1 best-selling title on Powells.com.