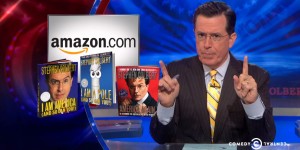 Colbert happens to publish his books through Hachette, the publishing house whose contract dispute with Amazon has led the online retailer to delay shipments of Hachette books.

In a segment that aired Wednesday night, the comedian ripped Jeff Bezos — comparing him to Lord Voldermort, the villain in Harry Potter — and finished the piece by giving Amazon.com the middle finger through a packaging box. With both hands.

“Now, I am not just mad at Amazon. I am mad Prime,” said Colbert at one point in the segment in exposing what he described as vicious tactics to delay deliveries and impede book sales. “So, watch out Bezos because this means war.”

But Colbert was not done there. His guest on the show happened to be celebrated Seattle author Sherman Alexie, who Colbert described as his “fellow Amazon victim.”

“They are doing it because they want a monopoly,” explained Alexie. “They control 40 to 50 percent of the book market, and they want more. And the only way they can do that is by forcing the prices lower and lower and lower and making it impossible for more and more publishers to publish their books.” 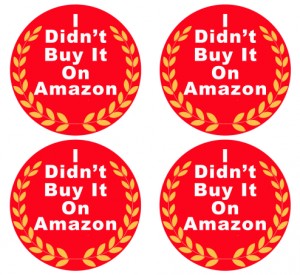 Alexie then encouraged book lovers not to shop at Amazon for anything. “Amazon controls so much of our world that we don’t even know about because they are on the Internet and they are invisible, we are not aware of their domination,” he said.

As Colbert often does, he’s taking the campaign against Amazon a bit further, encouraging his viewers to buy books through Portland-based Powell’s.

He’s also encouraging them to download stickers from his Web site that say: “I didn’t buy it on Amazon.”

“Peel it off, and then put it on any book that you are reading,” he advises.

Hi Colbert fans! Our site is going a little slow bc there are SO MANY of you but don’t worry, we’ll get all your orders! Thank you!

What a PR nightmare for Amazon. The question is: Will the company — whose crisis PR in the past seems to be to let things blow over — even care?

Here’s the first monologue from Colbert, followed by the interview with National Book Award winner Alexie.