Zillow CEO Spencer Rascoff is known as one of the hardest working dudes in Seattle tech. And that work ethic was on full display Tuesday night as Rascoff spoke to students and faculty as part of the Albers Executive Speaker Series at Seattle University.

Rascoff shared a number of his startup secrets, expressing the management tactics that have helped turn Zillow into the leading online real estate company in the U.S. (More on that below).

But, as a longtime follower of Zillow, I was most struck by an anecdote that emerged in the middle of the talk. 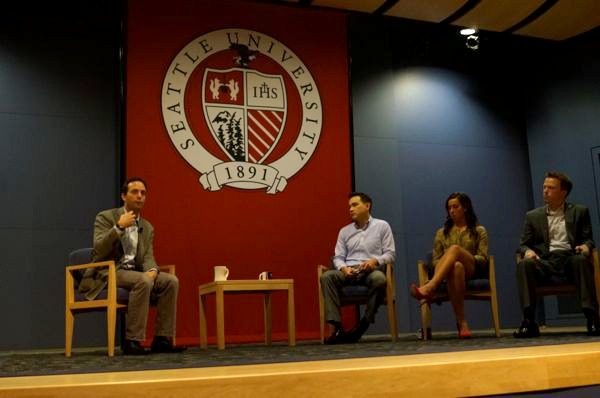 Within a few minutes, Rascoff responded, saying he was looking forward to meeting Luna and talking at Seattle U. It was classic Rascoff, who can regularly be found in the Zillow forums at all hours answering questions of real estate agents or responding to customer service issues on Twitter.

How he keeps pace is mind-boggling, and Rascoff shared some of his tips Tuesday night.

It’s certainly tough running a fast-growing publicly-traded company while managing a family. And Rascoff seemed a bit stumped when an audience member asked how he juggles work and family life, jokingly responding to the question by asking if it had been planted by his wife (who happens to be a respected pediatric physician).

“I am always working in the sense that I am always processing,” he said. “I think of myself as a computer that’s always whirring and purring in the background.”

Rascoff said that he tries to only be in the office from 8:30 am to 5:30 pm, spending time with his three kids in the evenings. He then works from 8 pm to 2 am, sometimes later.

“I don’t sleep much,” he says. “There is plenty of time to sleep when I am dead. I love work. I love what I am doing.”

That love of work and personal drive came across in Rascoff’s remarks, with some of it bubbling up from the negative experiences of working in the cut-throat culture of investment banking. Throughout his talk, Rascoff made several remarks about lessons he learned working on Wall Street and in private equity, not all of them positive, describing the profession as having a “mercenary culture.”

Rascoff still loves finance, but he’s most excited about mixing things up as a startup guy. At nearly 700 employees and boasting a market that just today topped $2 billion, can Zillow stay lay claim to the startup title?

Rascoff, for one, thinks so. “Startups are a state of mind,” he says.

Here are more insights from Rascoff: 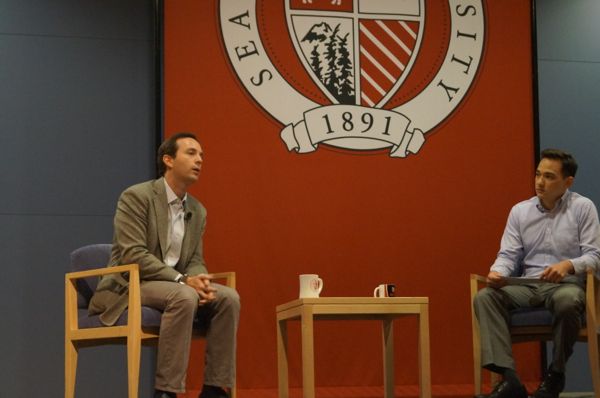 On advice for students looking to find their path: “Wherever you are working, whether summer job or full-time job, look at the people 10 to 15 years senior to you and think to yourself: ‘Do I want that person’s life….’ I mean the whole package. Are they happy? Would you be happy if you were they? Everything from their compensation to their responsibility to the way they are perceived in the community…. When I was investment banking, I asked myself that and looked to people 10 to 15 years senior, and I said: ‘Wow, they are really, really wealthy, but they seem really unhappy.’ And I thought I’d be unhappy in that role.”

On how startups are different from big companies: “Imagine this petri dish which is this giant company which is where the ecosystem is really well understood. The rules are very clear, and you pretty much know how that ecosystem works. The startup ecosystem is exactly the opposite. It is completely insane and crazy. There are no rules. And there is no order. I am comfortable in this environment because I feel from a Darwinian standpoint that I will do really well in that environment, that I will find myself a couple years later running something interesting…. But there are a lot of people who are completely terrified of that type of chaos. So, you have to figure out which environment you are more comfortable in.”

On the impact of going public: “I personally think all of that baggage of being public is overblown. Most of what we needed to do to become Sarbanes-Oxley compliant we were already doing…. What I was more worried about was what impact would it have on the corporate culture. Because like most startups, we were very open with employees about results and strategy, and I knew that would have to change as we went public. And it turned out that that wasn’t that big of a deal because, what I learned, most employees didn’t really care about the minutiae…. What they really cared about is: ‘What am I doing here? What are we trying to accomplish? And why am I here?’ The interesting thing is, now that we are public, I am actually better at communicating all of that to employees….”

On whether he feared they would become a slave to quarterly results: “We have a dual-class stock, which means the founders of the company have a separate category of votes than individual shareholders. If we weren’t going to focus on the long-term already, having the dual-class really allows you to because we truly can make long-term oriented decisions rather than be subjected to the whims of quarterly results.”

On the importance of mobile: “Mobile has been this incredible God-send. If Apple had not invented the iPhone and Google had not bought Android and made it free and we were not running around with computers in our pocket, Zillow would not be the company that it is today. There is just no doubt in my mind. There are a couple reasons for that: One, our usage trends have dramatically accelerated because of mobile … but two, more interestingly and more importantly, monetization on mobile is significant. Someone looking at Zillow on mobile is three times more like to contact an advertising agent of ours than someone looking at the same page on the desktop. You contrast that with so many companies that have had this usage migration from desktop to mobile, but are now struggling on how to monetize mobile. We have the exact opposite phenomenon that we benefit from the migration.”

On his work ethic: “I try to (lead) by example. I am probably the hardest working person at the company, and I think that is very important to maintain that distinction. I try to lead by example in terms of work ethic. I am incredibly accessible to employees to investors to the media. We were Tweeting at like one in the morning last night, right. You Tweeted my, and I Tweeted you back like two seconds later…. So, I am accessible…. In terms of where I got that from, I don’t know. I just kind of got it. I’ve been beating up on investment banking quite a bit, and one of the many problems I had with investment banking is that it is a mercenary culture, not known for its best practices in employee management. It is a very much eat-what-you-kill culture. So, there are a not lot of best practices that you can learn from investment banking around personnel management.”

On building Zillow in Seattle: “I have a lot of experience in the San Francisco startup scene and the Seattle startup scene. They are pretty different, and they each have their own pros and cons. For Zillow, it has been very beneficial to be headquartered in Seattle because we are a big fish in a small pond here. If you want to work at a hot technology company in Seattle, Zillow is one of the most desirable places to work. If we had been in the Bay Area, we would have been one of a couple dozen desirable places to work, so we were advantaged to being headquartered here. Employees in Seattle tend to be more long-term oriented about their company, i.e they are loyal. There is a bit of a wandering eye in the Bay Area because everyone has got something hot going on on the side. The knock on the Seattle startup scene is that it is not a vibrant enough startup culture and so some people say that there is not a lot of funding… But I’d say Seattle is a lot smaller than San Francisco in a lot of ways, and the tech scene is no different. I am grateful that Zillow is headquartered in Seattle, and if I were to do another startup I’d probably do it in Seattle as well.”