A little more than a year ago, in the fall of 2011, Microsoft’s Xbox 360 business was basking in the glow of the “Kinect Effect”. 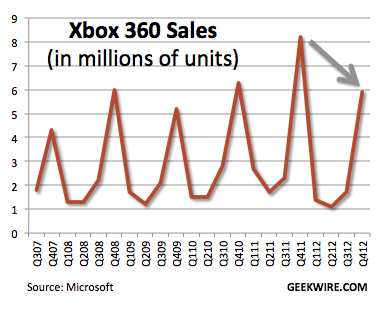 Interest in the motion controller was driving record sales of the Xbox 360 a full six years after its release — a whopping 8.2 million units sold for the 2011 holiday quarter. Microsoft’s console would go on to top the PlayStation 3 and Nintendo Wii for the first time in head-to-head worldwide annual sales.

Fast-forward to present day, and that effect is hard to see.

Even as Halo 4 set new records, Microsoft’s global console sales fell more than 28 percent, to 5.9 million units, in the 2012 holiday quarter, according to numbers released by the company last week. To put that in context, the result was below the Xbox 360’s holiday sales in 2008, according to historical figures compiled by GeekWire.

The difference is significant: Microsoft said revenue from the Xbox 360 platform fell $1.1 billion, or 29 percent, in the most recent quarter, compared to the same quarter last year.

Also telling: Microsoft hasn’t updated its Kinect sales figures since January 2012, when the company reported that it had sold a cumulative total of 18 million units of the sensor.

The trends being experienced by the Xbox 360 and Kinect are part of an overall decline in the console market, as the current generation of hardware reaches the end of its life cycle and many gamers shift their attention to mobile devices.

Microsoft is still doing well relative to its competition, particularly in the U.S., where the Xbox 360 has been atop the market for two straight years. But the trends over the past year boost the pressure on Microsoft to shake up the market with a strong successor to the Xbox 360, and fast.

Nintendo has already launched its next-gen Wii U, and Microsoft is expected to follow suit with its next console later this year. The signs of this transition were evident in the Redmond company’s financial report last week, as Microsoft’s Entertainment & Devices Division boosted spending on research and development, and reduced sales and marketing spending for its existing console platform.

Does the console industry have a future? Depends on how you define it. Look for Microsoft to continue to broaden the reach of the Xbox into home entertainment as the Xbox 360’s successor debuts.

By that measure, Microsoft isn’t doing too badly: Apple still only sold 2 million Apple TVs in the holiday quarter. However, the skyrocketing sales of iPads suggests that a lot of money that would have been spent on consoles is going to a certain tablet instead.