Microsoft this afternoon posted earnings per share of 76 cents for the December quarter, beating Wall Street’s expectations by 1 cent. However, the company’s revenue of $21.46 billion for the quarter fell just short of analysts’ expectations.

The quarter included the launch of key Microsoft products Windows 8 and the Surface tablet. Revenue in the Windows division rose 24 percent to $5.88 billion when including revenue that had been deferred from previous quarters because of accounting rules related to Windows 8 upgrade promotions. Excluding that extra revenue, the actual increase for the quarter was 11 percent.

Microsoft says it has sold 60 million Windows 8 licenses so far, but the company isn’t disclosing unit sales figures for Windows Phone or the Surface as part of its earnings report.

Revenue in the company’s Entertainment & Devices Division, home to the Xbox, decreased 11 percent to $3.77 billion based in part on lower sales of the Xbox 360 console. Microsoft shipped 5.9 million Xbox 360s during the quarter, compared with 8.2 million a year earlier. The revenue decline was only 2 percent in this division when adjusting for $380 million in deferred revenue based on game content that won’t be delivered until later.

Revenue was down 10 percent to $5.69 billion in the Microsoft Business Division, but that was due in part to the deferral of revenue related to promotions for the upcoming launch of a new Office version.

In the Online Services Division, revenue was up 11 percent to $869 million, and the loss in that division narrowed to $283 million, from a loss of $459 million in the same quarter a year ago.

Here’s Microsoft’s 10Q filing with the SEC. The company’s conference call is coming up at 2:30 p.m.

Here’s a Microsoft slide breaking down the trends in the Windows business. 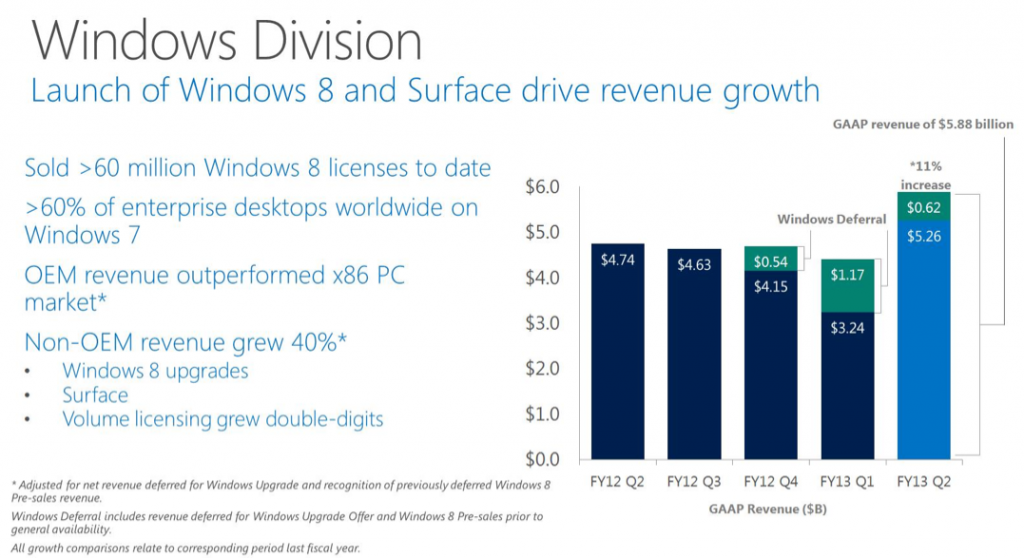