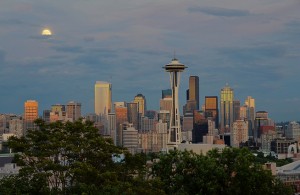 UBM’s Future Cities, a blog that focuses on how cities are developing, just put together a list of its ten best Internet cities in the world and the findings may surprise you.

The only U.S. city to make the cut was not New York City, San Francisco, Boston or Austin — it was Seattle.

The rankings were based on five criteria, with descriptions from UBM in quotes:

In its description of Seattle, UBM actually didn’t have great things to say about Internet speed and public WiFi. But they noted the growing startup scene and also loved two aspects of the city: Plans to bring fiber Internet to Seattle and the city’s Startup Seattle program.

Washington D.C. broadband developer Gigabit Squared will begin offering its service here early next year, working with the city and the University of Washington to provide customers with laser-quick Internet speeds for relatively affordable prices.

Startup Seattle, meanwhile, is a program that was started by Seattle startup impresario Red Russak and handed over to the city earlier this year. The new effort is designed to support the growth of the Seattle tech startup community and make the city recognizable around the world as a thriving startup ecosystem by way of partnerships, marketing campaigns, new innovation hubs and a revived StartupSeattle.com website.

Here how the rest of the top 10 Internet cities round out: