Good news for those wanting to browse the web and download content at breakneck speeds: Ultra-fast Internet is officially arriving in Seattle early next year at an affordable price.

There will be three pricing tiers. In terms of speed, Plan A is like a Ford Focus, Plan B is a BMW while Plan C is the Ferrari.

In early 2014, Gigabit’s service will be first available in two of the 14 “demonstration” areas: U-District and Capitol Hill. Gigabit President Mark Ansboury told us that those neighborhoods were picked due to high demand and access to already-available infrastructure. Each of the 14 areas — about 100,000 homes — will have access to Gigabit’s network by the end of 2014.

[Follow-up: Why this ISP is wary of Seattle’s new gigabit Internet provider]

“Seattle really wants fast, modern broadband service and the high demand we’re seeing reflects that fact,” said Seattle Mayor Mike McGinn. “The University District and the Capitol Hill-First Hill-Central District area will provide a good testing ground for Gigabit Squared’s service. I know there’s a lot of demand in the other neighborhoods too and I’m looking forward to seeing them get connected throughout 2014.”

Since Gigabit announced its public/private partnership with the city in December, the demand has been incredible. Thousands of requests have poured in at a rate of more than 200 or 300 per week, Ansboury said, which has propelled Gigabit’s business plan into its third year already.

“We believe Seattle is ready for this innovation, and they clearly asking for it,” said Ansboury, who added that his company will be spending $50 million on deployment in Seattle.

It’s easy to see why there is such high interest. In the ISP space, the cost of deploying and installing fiber is cheaper than using cable, and traditional broadband companies like Comcast already have infrastructure that they need to get a return on — not to mention the company actually says its customers aren’t ready for faster Internet yet.

That leaves a huge opportunity for a greenfield company like Gigabit Squared to step in at the ground level and create something new — which, in this case, is the fiber optic network that offers fast upload speeds that can expedite two-way sharing of information.

“These cable companies are saying you don’t need faster Internet and that they already have enough for you,” he said. “We are trying to provide services that people want.”

In the future, a company like Comcast could actually pay Gigabit Squared to provide the high-speed fiber optic Internet to its own customers, something that Ansboury supports. 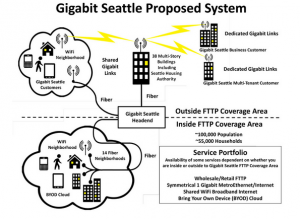 “We’re creating an open-access network that can be shared with other carriers,” he said. “We want to give customers the ability to get services from multiple customers.”

A lot of the people around Seattle interested in Gigabit’s service were entrepreneurs with small businesses looking for better bandwidth, which didn’t surprise Gigabit. After all, it’s one of the big reasons the company chose Seattle — along with Chicago — as the inaugural city to try out its new service.

“There is a very creative class here built on entrepreneurism and they want to see things happen,” Ansboury said.

Google Fiber is another big fiber optic network now available to customers and offers a payment plan similar to Gigabit’s. Ansboury said he doesn’t expect to be in the same cities as Google.

“We aren’t trying to compete with other gigabit communities,” he said. “At the end of the day, we are both trying to promote gigabit capacity and give you the bandwidth to create the apps and services you really want.”

Gigabit, which is also partnering with the University of Washington this project, will first use a combination of public and private fiber optic cables already available in Seattle and will soon begin building its own infrastructure, which could end up growing past just the 14 “demonstration neighborhoods” if the interest and demand keep up.

“We will go where people have need,” he said. “We expect this whole area to grow.”

The company will announce a “simple sign-up process” next month for those interested. This list will also help prioritize the rollout of the 12 other neighborhoods. For more about Gigabit Squared Seattle, check out this extensive FAQ.