A few details on pricing. Gigabit president Mark Ansbour said that the company will offer different levels of service but wouldn’t provide specific numbers. He said the prices will be similar to competing services.

“As a result of what the city has been able to do, we will be able to drive costs down significantly,” he said.

The city said that the cost of leasing the routes is based on revenue-sharing and will be dependent on how many partners are using the routes.

McGinn wanted to reiterate that the city isn’t doing this to make money.

“This was not intended to be a profit center for the city,” he said. “The focus is on the generation of public benefits. We were not entering this as a profit-making venture.”

Really liked what Ed Lazowska had to say at the press conference. Lazowska, the Bill & Melinda Gates Chair in Computer Science & Engineering at the UW, noted that despite broadband being invented in the U.S., the country ranks just 29th out of 34 OECD countries in average advertised broadband download speed.

That, he says, results in the absence of advanced applications, which creates a shortness of customers and then justifies the absence of broadband — a “catch-22” of sorts.

“Not having enough broadband kills our competitiveness,” he said.

McGinn announced that city has agreed with Gigabit Squared, a Washington D.C. broadband developer, to develop and operate an ultra high-speed fiber network in Seattle.

The city, the UW and Gigabit signed a MOU that allows Gigabit to start raising the capital required for engineering work to build out the fiber network.   It’s the company’s second city project, with the first coming in Chicago.

The network is called Gigabit Seattle and there will be 12 “demonstration fiber projects” in neighborhoods around the city that includes three parts: fiber directly to homes and businesses in the 12 neighborhoods, broadband connections to multifamily housing and offices around Seattle, and next generation mobile wireless internet.

McGinn ended his announcement by talking about how Bill Gates and Paul Allen got their start by sneaking into the UW and using the latest computer technology that no one else had, which gave them ideas to eventually build a software empire.

“What ideas will we get now?” McGinn asked. “I still believe the next big thing will come out of a spare bedroom or garage somewhere in Seattle.” 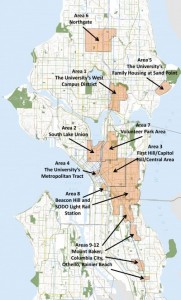 The city considered four different proposals that met its criteria, but Gigabit had the most promising plan.

“There are risks involved with this being a private market venture,” McGinn said. “You have to raise capital and attract customers. But we have a plan together to work with Gigabit Squared and use our assets to make that opportunity available. If Gigabit can roll out a product that has acceptance in the community and it works, we’re hopeful we can expand this to more neighborhoods.”

Seattle mayor Mike McGinn is set to announce plans to develop an “ultra-fast broadband network” today at 10:30 a.m. Follow his news conference with the live stream above.

The conference is on the University of Washington campus. UW president Michael Young and Mark Ansboury, president of Gigabit Squared, will be on hand.

Back in October, McGinn released a request for information to private companies who want to use the city’s 500 miles of unused cabling throughout the city.

“We are moving ahead on expanding our next-generation infrastructure, helping Seattle compete in the global economy,” McGinn said in the October press release. “I look forward to seeing the applications from private providers seeking to improve our city’s internet service for our residents and businesses.”

There was Nov. 30 deadline for a letter of interest and desired fiber route information and responses were returned by Dec. 10.

Most agreements will be five years, but the city considered terms up to ten years. There was a priority list used when reviewing responses.

The City Council approved the plan in July with an 8-0 vote.

The City has already worked with The University of Washington, King County, Seattle Public Schools, Washington State Ferries and other government entities over the past 14 years to maintain and install fiber optic cable throughout the city.

But residents and businesses have been complaining about slow Internet and thus, the city responded with this new plan. Opening up the fiber network to private companies should increase internet speeds and allow for competition between providers.

Mayor McGinn has already pushed hard to bring fiber optic cable to Pioneer Square, a high-tech hub that historically had been bypassed by the big telecommunications companies. Comcast won a high-speed Internet contract for the neighborhood last summer, with the company saying at the time that it had always wanted to serve the area but chose not to given the high costs of laying new fiber in the neighborhood.

McGinn and Young have also been working together to help improve Internet speeds around the UW community.