Microsoft is releasing a new version of its YouTube app for Windows Phone 8 today, with new capabilities that take advantage of Windows Phone’s core features. It’s part of a broader effort by Microsoft to strengthen its lineup of Windows Phone apps to better compete with the iPhone, Android and BlackBerry. 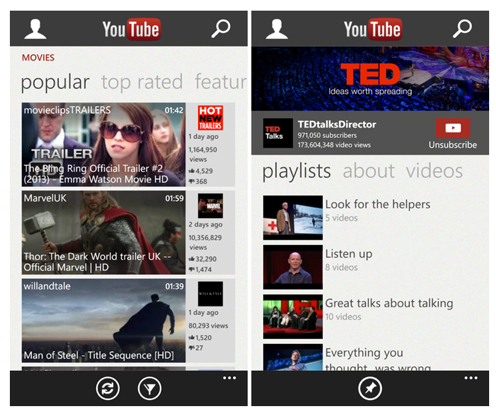 The YouTube app is notable in part because Microsoft had complained in the past that Google was hampering its ability to offer a full-featured app for Windows Phone. (Microsoft itself makes the YouTube and Facebook apps for Windows Phone.) I’m checking with Microsoft for an update on the situation with Google, and to see whether this latest refresh resulted from better cooperation.

Update: In short, the answer is no. Here’s the statement from a Microsoft spokesperson. “Windows Phone invested additional engineering resources against existing APIs to re-architect a Windows Phone app that delivers a great YouTube experience, including support for unique Windows Phone 8 features such Live Tiles and Kids Corner.  Microsoft did not receive any additional technical support to create the Windows Phone YouTube app.”

In addition, Microsoft says the YouTube app can be pinned to Kid’s Corner feature of Windows Phone, incorporating safety settings to filter out objectionable content. The updated YouTube app is rolling out gradually to Windows Phone users today.