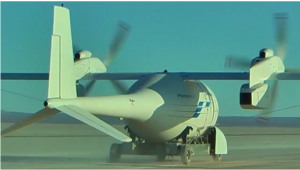 The Phantom Eye completed taxi tests yesterday at Edwards Air Force Base in California and reached speeds of 46 miles an hour.

The unique aircraft, with a 150-foot wingspan, is designed for “persistent intelligence, surveillance and reconnaissance, and communications.” In other words, it’s a spy plane. Boeing says it will fly at an altitude of up to 65,000 feet for up to four days, with a 450-pound payload.

Phantom Eye completed its first flight June 1, staying aloft for 28 minutes and reaching an altitude of 4,080 feet. There have been several improvements made since the initial flight in June. Boeing upgraded engine oil pumps, installed new software and fixed the landing system after the original nose gear collapsed during the June test.

Boeing considers the unmanned plane a “game changer.” Once operational, the aircraft will be able to take off from the continental United States and go to almost any point on the globe and remain over an area for several days to monitor a situation on the ground.