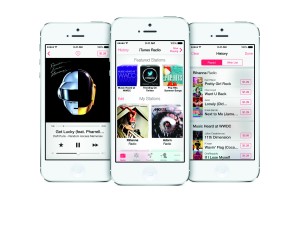 With the launch of iOS 7 came iTunes Radio, Apple’s much-touted entry into the streaming radio space. The company that brought you the iPod is now going to try and compete with Pandora. The question is: Can they?

To try and figure that out, I set out to do an examination of how iTunes Radio fits into its competitive landscape, compared to other, older players in the space. As it turns out, while Apple may be new to the party, they definitely brought some punch.

Apple is clearly leveraging its advantage as the controller of the iTunes Store to make a big splash in an already crowded market. Rather than selling monthly subscriptions, iTunes Radio is simple: listen for free on iTunes or any Apple device, and you’ll be served ads, unless you pay $25 a year for Apple’s iTunes Match service, which also allows you to stream music from the cloud to your mobile devices.

Mobile streaming has long been one of the major premium offerings from other streaming sites, and for Apple to offer it for free is a major shot across the bow of its competitors.

Of course, capabilities are one thing, but how do the services stack up when it comes to selection?

For my comparison, I looked for popular and free services that provided radio functionality. The gauntlet that I finally settled on was as follows: Pandora, Rdio, Spotify, Slacker and iTunes Radio. 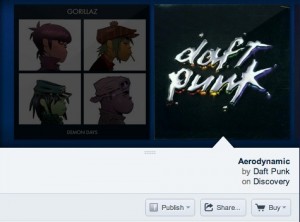 For testing, I decided to see how each service handled ten songs for a station created from three different artists: Bruce Springsteen, Daft Punk and Hadag Nachash (an Israeli hip-hop group). I chose Springsteen and Daft Punk because they’re both popular artists working in different genres of music, whose styles have varied over the course of their careers, and I wouldn’t mind listening to nearly four hours of music that algorithms decided was related to them.

I chose Hadag Nachash as a challenge, to see how each service handles a fairly esoteric request for an American. I wasn’t expecting any of them to be nearly as precise in their recommendations, but I was interested in how each one would handle it.

As it turned out, my plan worked. The different services all had different takes on the popular musicians I fed them, though Hadag Hachash was another matter. 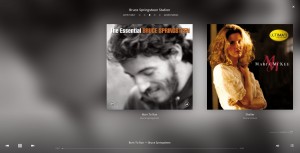 For popular musicians, Spotify was the clear loser among the five, with its recommendations feeling like something I could get from a generic genre station. The overall selection didn’t feel like it was connected to either major artist’s work in any signficant way.

Pandora felt boring. The grizzled veteran of the online radio space clearly has its recommendations tightened down, though it skewed towards popular songs and safe picks. If you’re looking for someplace that plays the hits, Pandora’s got you covered, but I like a radio service that shows me stuff that’s also a bit off the beaten path.

Rdio was an absolute stand-out, serving up a potent variety of tracks that still felt well-connected to the source material. The one annoying component of my experience with it was that around the fifth or sixth track into a session, the station pivoted to take a different musical tack from where it was before. While the changes halfway through still meshed with the artist, it felt jarring. Still, the selection was good enough that I can easily forgive a somewhat drastic shift.

The best comparison I could make with Slacker is that it was the Big Mac of all these services. Consistently mediocre, filling, and very commercialized. Its selections weren’t spectacular, but they worked better than Spotify’s. Its ad density was easily highest of all the services, but it wasn’t so annoying that I decided to just up and leave.

iTunes Radio was more varied than Slacker while still remaining on base, though its recommendations felt more focused towards Daft Punk’s recent, funk- and disco-influenced work, as well as Springsteen’s older tracks.

When it came to Hadag Nachash, all of the services that I used parsed my request in one of three ways. Slacker, Rdio and Spotify got the Israeli bit right, and focused on hip-hop to varying minor degrees, while Pandora didn’t believe me when I said that Hadag Nachash was a band.

iTunes Radio, for its part, threw the Israeli part of Hadag Nachash’s identity right out the window, but stuck to politically-aware American hip-hop. While I think iTunes Radio gets points for trying, its recommendations felt off-base, and worse than Spotify’s in some cases, which is saying something.

Overall, in terms of content, Rdio was tops. If I could only choose one streaming radio solution for the rest of my life, Rdio would be it. But its free tier only lasts for six months, at which point you either need to pony up the cash for a subscription, or move on.

iTunes Radio still has some weak points, as shown by the Hadag Nachash test. I’ve heard some horror stories on Twitter that the iTunes Radio’s classical selection is lackluster, but for people listening to rock or pop, it seems to get the job done fairly well.

The killer feature of iTunes Radio isn’t the tracks, or its personalization. Free, high-quality, streaming radio, without any catches, on mobile is next to impossible to come by.

Apple is perfectly happy to provide that, which is what, in my eyes, puts it over the top of Rdio, unless you’re a fan of music that’s further outside the mainstream.

Of course, there’s one flaw in my testing: all of these services live and die on personalization. If you already have a station or stations somewhere that make you perfectly happy, you may not want to train yet another radio service how to meet your musical needs.