Many financial applications help consumers look into the past, indicating where things stand once the money is already gone. TruBalance, a Seattle startup that emerged from last year’s Seattle Startup Weekend: Women’s Edition, has another idea: Help predict where the cash is going to go in the future.

“TruBalance helps you take charge of your money. Know what you can spend today, tomorrow, and beyond,” says co-founder Keith Harper.

We caught up with Harper for the latest edition of Startup Spotlight.  Here’s more on how they are taking on the financial industry, with the company slated to present at the AngelHack’s Hackcelerator Demo Day on Sept. 5 in Redwood City, Calif.

Explain what you do so our parents can understand it: “TruBalance is a free application that connects to your bank account and predicts the future of your money.”

Inspiration hit us when:  “We were literally sitting in our car, waiting for a ferry, about seven years ago. Mint didn’t exist then. I don’t even think the iPhone or Twitter existed then. It was the dark ages. I digress. We had been using Microsoft Money for a while then (it doesn’t exist anymore). Money was one of those bloated desktop applications where you use one feature out of a hundred. That one feature being, you guessed it, a cashflow forecast. It was great at this one thing, but you couldn’t access it on the inter webs. Our initial idea was simply to take that feature and put it online. Seven years ago, we didn’t have the experience or the chops to build a product. I kid you not, we’ve literally been waiting for someone to build this, and it blows my mind that no one has. So here we are, seven years later, building this thing as quickly as we can, before someone else does.”

VC, Angel or Bootstrap: “We’re looking to partner with angel investors and seed funds so that we can hire additional talent, iterate quickly, and start generating revenue. We’ve bootstrapped one product previously, and while we could do it again, we think that we need to move much quicker. Bringing experienced investors into the fold will help propel us from point A to point B much faster.”

Our ‘secret sauce’ is: “Our predictive cash flow is what sets us apart. Everyone’s busy analyzing the past, but no one’s looking the other direction. Consumers need to know what’s on the horizon (bills, income, vacations). We’re focused on the future of your money – how much money you can spend today, tomorrow, and beyond. Now that’s great, but wouldn’t it be even better if you could apply your past spending habits to the future? That’s exactly what we’re doing – layering your past spending patterns on top of your future cashflow, to generate an even smarter financial model.” 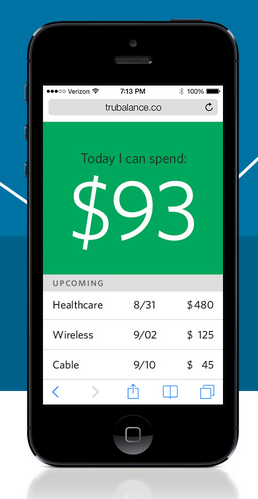 The smartest move we’ve made so far: “Bringing in our third co-founder, Brian Johnson. Jana (Harper) and I know how to build a product – we’ve done it once before. But we’re not experts in behavioral finance and advice, and advising is what Brian does on a daily basis (to both individuals and businesses). When we brought Brian into the mix, we became a much more viable team and business. Brian’s insight into how people’s minds deal with money is incredibly important. Human beings can act very irrationally, especially when you’re dealing with an emotionally charged subject like money, and tapping into his knowledge will help us really solve consumer pain points.”

The biggest mistake we’ve made so far: “We should have started educating ourselves about fundraising sooner. Raising money is much more difficult than bootstrapping a product. We’re makers at heart – we like to build things. We participated in Startup Weekend in 2012, and I’d say that we could have started this process back then. But we’ve learned so much since May’s AngelHack event, and I think the biggest positive that’s come out of this is that we’re learning a TON in a short period of time. When you don’t know much about a subject, it forces you to become a student again, and that learning phase is when you grow the most as an individual.”

Would you rather have Gates, Jobs, Zuckerberg or Bezos in your corner: “I think for TruBalance, Zuckerberg would be the person we’d want in our corner. We intend to move at a fast pace, and an important part of our business model is gaining traction with many consumers. Facebook had such incredible growth, and our goal is to emulate that growth curve as much as possible. Social networks solve a need for people, and we think that TruBalance also solves a need, so there are some similarities there. Our branding will focus on the positive effects of being in control of your money – confidence, not despair, for example.”

Our world domination strategy starts when: “We gain enough traction to build valuable consumer data. Our plan is to help data marketers increase the value of their offerings. We’re going to help advertisers target their ads more effectively. And we’re going to help retailers improve their conversion rates. All of this will be accomplished in aggregate form. Security is an important piece of the puzzle, and we’re taking this very seriously. None of the data that we share with partners will be reverse-engineerable, as it will be only in aggregate form.”

Rivals should fear us because: “Rivals shouldn’t fear us, they should work with us to integrate our predictive cash flow into their products. Our mission is to help people spend wisely, reach their goals, and worry less about money. If any of those things align with the interests of your customers, we’d love to talk. We think that our technology can complement a range of other products, companies, and institutions. If you know anyone in the government, we’d love to talk to them about how we can help them reach a goal of reducing the deficit.”

The biggest hurdle we’ve overcome is: “Attempting to build and launch a product in 10 weeks, as part of the AngelHack Hackcelerator program. It’s proven to be quite a challenge, and we’ve come pretty close, but with a financial product like TruBalance, there are some extra hurdles to jump over when it comes to security. We’re always leery of stating a launch date, but I can say that we’re pretty close at this point.”

What’s the one piece of advice you’d give to other entrepreneurs just starting out: “Pick the brains of everyone who’s done this before you. There’s no better advice, and perspective, than from a seasoned entrepreneur or investor. I suggest finding a mentor – that’s actually been a really great part of the AngelHack program. We’ve been working with Tyler Carper, who runs an innovation lab within HTC, and his experience, advice, and feedback has been invaluable. And don’t even pretend to know everything – you should be a like a sponge, soaking up as much feedback as you can get. That’s the only way to refine your idea. Keep an open mind and heart and you’ll be good to go.”