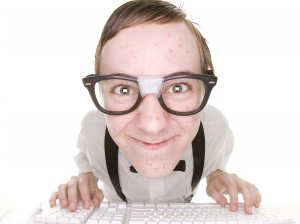 Blame “The Big Bang Theory” for the lack of women in tech.

That’s the conclusion from new research out of the University of Washington, which found that women don’t choose careers in computer science because of the “nerd” stereotype in the media.

UW psychologist Sapna Cheryan ran two studies to find out if the lack of women in tech was due to their disinterest in the topic, or other reasons. First, she asked 254 non-computer science college students to describe CSE majors. They were perceived to be “incompatible with the female gender role, such as lacking interpersonal skills and being singularly focused on computers.” Some even said that geeks were smelly, pale and thin — they clearly haven’t read this article.

In the second study, students were given two fabricated news articles — one described computer scientists as stereotypically nerdy, while the other did not. The results: Women that read the article about the “cool” geeks showed more interest in computer science afterward than those who read about stereotypical “nerds.” Men, on the otherhand, were not affected either way.

“Taken together, these studies suggest that stereotypes of academic fields influence who chooses to participate in these fields, and that recruiting efforts to draw more women into computer science would benefit from media efforts that alter how computer scientists are depicted,” the study found.

So basically, more women would get into tech if Bill Gates and Steve Jobs were muscular, tan and donned fantastic cologne? Cheryan says no.

“Our message is not that the people in computer science need to change,” she said here. “It’s a marketing issue. When students think of computer science, they think of all these stereotypes that are not accurate. If we could expose students to what computer scientists are really like and all the varied and interesting things they do, we can have a positive effect on participation in the field.”

The tech and startup industry is certainly dominated by men. However, there are definitely some notable female entrepreneurs in the Seattle area: Julie Sandler at Madrona Venture Group, Mary Jesse at Ivy, Liz Pearce at LiquidPlanner, Jane Park at Julep and Christina Lomasney at Modumetal, just to name a few.

The picture to the right is from Startup Weekend Women’s Edition, an event hosted last summer by Sandler and Shauna Causey of Decide.com. It marked the first time that a female-oriented hackathon was held in Seattle. Of the 90 participants, 75 percent were women.

Previously on GeekWire: Calling all coders: How did you learn how to program? … Life in Code: Why this entrepreneur is telling the stories of women in tech