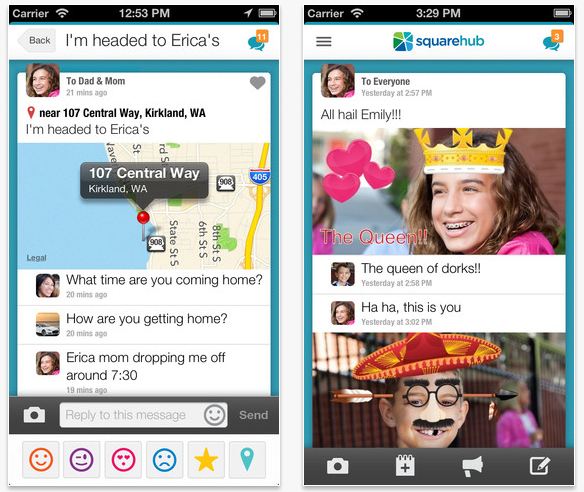 Dave Cotter is a divorced father of three girls — a busy guy who struggles to keep up with his family’s hectic schedule.

“My ex wife and I were just looking for a better way to stay coordinated,” says Cotter, a well known entrepreneur who previously served as a general manager at Amazon.com.

From that personal situation, SquareHub was born. The startup company, which has operated rather stealthily for the past year, is launching a new iOS app today that’s essentially a private social network for families.

The goal? Help busy families stay connected, whether it’s picking up the kids from gymnastics or sharing a special photo from the beach. SquareHub is more than an online calendar, though it does serve that purpose as well. In that regard, SquareHub will compete with another Seattle service, Cozi.

“Online calendars are great when you know that the soccer game is at 9 a.m. on Saturday,” says Cotter.

The communications bottlenecks, however, usually arise around all of the stuff leading up to that soccer game.

“Where are the shinguards? Where are the cleats? Who is picking up? Who is dropping off? Who is bringing oranges? Is there a playdate afterwards? It was all of this stuff that bookended the appointment, and it just became kind of scattered in text messages and email messages and photos from the game,” says Cotter, “All of this stuff, we just needed to share with us, but we didn’t want to put it on Facebook. There was no service that allowed us stay connected and coordinated, and, frankly, allow our 13 year-old, 10 year-old and 8 year-old to participate as well.”

In many respects, SquareHub is looking to keep modern families in tune with the “constant narrative” going on in their lives. In Cotter’s view, there was no “common platform for all of the ages, and all of the devices” that was private.

The app is kind of like Facebook for families, though it is more of a “relational social network” since it connects people around specific events or activities. Cotter says he wants to help “evolve social networks” so that they play a more important role in individuals’ lives, keeping the critical information private and accessible to the people who matter.

SquareHub, which is free, is only available on iOS. However, family members can participate without downloading the app, so messages can be routed to the person’s phone.

The company is working on an Android version, and hopes to release that version this summer.

SquareHub has raised $650,000 to date, and boasts an impressive lineup of Seattle area angel investors. They include:

That’s a heck of a lot of folks for just $650,000, and Cotter says there was a “little bit of a method to the madness” in terms of fundraising. 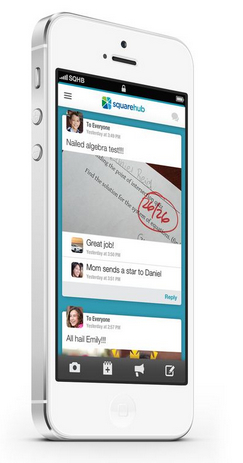 “In my opinion, it feels better to raise smaller chunks from more people, even though it takes a little more time. You just get more perspectives, and more opportunities for them helping you down the road,” he said. “If you raise from one person, your network is just not as big.”

Some of those investors are impressed with SquareHub’s design and approach.

“While mobile technology makes it easy to connect with a lot of people during the day, it has never really tackled the problem of bringing the most important people closer together—your family,” said Cole Brodman, former chief marketing officer at T-Mobile USA and a father of teenagers.

Here’s a closer look at the app through the eyes of Cotter’s own modern family: