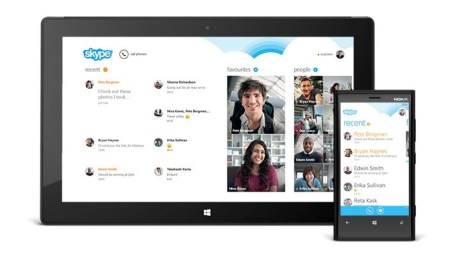 Skype is promising to make it easier to access and send chat messages inside its apps —saying it’s “putting conversations at the heart of a redesigned experience” while aiming to make Skype overall more consistent to use across various devices.

That’s the word from a new Skype post that gives a general roadmap for the future of the Microsoft-owned service.

The post underscores Skype’s evolution as a general-purpose communications service, beyond the core video chat for which it’s best known. Skype earlier this year absorbed millions of users of Microsoft’s Messenger service, which has since been shut down. The native messaging app in Windows 8 will also reportedly be replaced by Skype as part of the Windows 8.1 update.

The post also indicates that Skype’s design across platforms will take cues from its redesigned apps for Windows 8 and Windows Phone 8. Those apps show recent conversations, favorites and contacts on the home screen in Microsoft’s “Modern UI” style.

“To make all your interactions on Skype easier, we are putting conversations at the heart of a redesigned experience,” the company says in the post. “Not only is this Modern design bold and beautiful, but it’s also simpler and easier to use. Doing this on Windows 8 and Windows Phone 8 dramatically reduced the time it takes to reply to a message, while making it even simpler to upgrade that conversation to a voice or video call. Our aim is to make the experience and design of our apps as consistent as possible, while still respecting each device’s unique look and feel.”

In addition, Skype says it will improve battery life and performance, and make the overall set of features more consistent across different platforms by the end of the year. It cites the recently released features of video messaging, picture sharing, and HD video as examples.