Seattleites don’t just have an option of catching a cheap ride from a stranger with a smartphone app.

We have a choice.

With most apps I use, one service is so far ahead of the pack that there’s no contest. Not here. Uber is rolling out its lower cost UberX service in Seattle and says it wants a piece of the ride sharing pie. But it’s Sidecar and Lyft that are leading the way for social, questionably sanctioned hop-in-my-car transportation.

I thought I’d be struck by the differences when I gave the two services a test ride this week. I wasn’t. That’s because despite cosmetics and one key split in how riders connect with drivers, Sidecar and Lyft are two strong versions of the same new thing. And that thing was pleasant. Even fun.

“Can you bring mace?” my husband asked when I told him I was doing this. Nah. Both services interview their drivers, check their records and run background checks. Maybe I’m more trusting than most. But that was good enough for me. 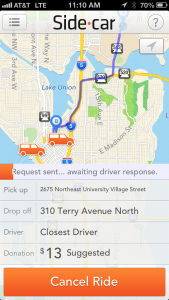 I reached for the back door when my Sidecar driver, Curtis, pulled up in his Ford Fusion. With a laugh, he invited me to the front. I didn’t make the same mistake with Lyft. That’s part of the selling point with both these apps — sit up front and have a chat. I get carsick checking my phone in the back of cabs because I have nothing better to do. This was a nice change. I left both rides smiling, and it made the rides more casual.

And I mean casual. Curtis took me from University Village in the University District to lunch at the Brave Horse Tavern in South Lake Union. My Lyft driver, Michael, took me back. Both made the kind of small mistakes a friend could make, but a cab driver never would. Michael missed the turn to University Village. Curtis forgot to get on I-5 and took me on the scenic route. In both cases, we laughed it off. I was in no rush, and both guys were a blast to talk to.

The apps look so alike that using one makes you more familiar with the other. In both cases you download the app, enter your credit card info, and go to a live map screen where you can request a driver.

Here’s where that key difference comes in, and it’s a big one — visibility.

Both apps ask for your pick-up spot — presumably your current location — but only Sidecar asks for your destination. That does two things. It gives drivers more information about your ride, in case they’d rather pass, and it gives you a sneak peek at the suggested “donation” you’ll pay for the ride before you confirm the request. 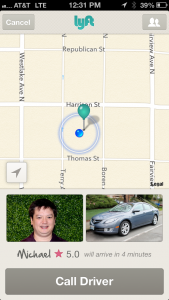 Sidecar also lets you see the available drivers’ names, photos and star ratings and request a particular driver, even if he or she isn’t the closest one to you. On Quora, Sidecar CEO Sunil Paul compared Sidecar to Match.com and “dispatching” services like Lyft to “arranged marriage.” Practically, it’s not so dramatic. Drivers get kicked out if they’re no good. Sidecar gives you more choice, but also more work.

Then there’s this: At the end of your ride, both apps ask you to rate the driver, and the driver to rate you. Sidecar drivers can see what you paid when you pay it; Lyft drivers don’t until they get a daily donation summary later on.

A Lyft spokeswoman said the company wants drivers to rate you on the experience, not how well you pay. The same ends up being true of Sidecar, though if you pay immediately when the ride is over, a Sidecar driver could technically see the donation before they rate you. That hardly ever happens. Either way, not paying is not good. Curtis, who’s given a record 450+ Sidecar rides in Seattle, told me about a woman who took multiple long rides but never paid. She was eventually blacklisted from the service. He didn’t say if she was nice. (Update: I changed this paragraph after hearing from Sidecar drivers in the comments and checking in with a Sidecar rep. Earlier I’d implied Sidecar drivers might easily rate riders after knowing what they’d paid. Turns out that’s rare.)

It was clear enough on my rides that Lyft has the marketing advantage. I complimented Curtis on the small heart-shaped sticker he had on his windshield. Turns out it’s supposed to help identify Sidecar cars. Other drivers use bigger stickers, but Curtis said he prefers to drive “incognito.”

“Sometimes they stop in the middle of the street to take pictures,” Michael said. 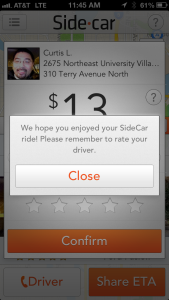 If the services compete for customers, they’re united against regulators. I mentioned that Lyft and Sidecar are “questionably sanctioned.” Truth is, I have no idea how to describe their status in Seattle or anywhere. Even the city doesn’t know. Seattle City Council President Sally Clark admitted to The Stranger this month that services like Sidecar and Lyft are probably subject to for-hire regulation, but the city hasn’t figured out how. The California Public Utilities Commission has had the most time to deal with the services. But even they’re still scratching their heads.

Both Sidecar and Lyft insist they’re legit as is. Their drivers aren’t employees but volunteers. Rider payment isn’t a mandatory fee but a voluntary “donation.”

Curtis quit his job as a car salesman to drive Sidecar full time. Michael, a bartender, saw Lyft driver ads while job hunting and gets his shifts a week in advance. As for not paying, it’s an option, but who’s going to take it?

Sidecar and Lyft launched in San Francisco last summer. Sidecar landed in Seattle in November. Lyft’s been here a whole week. Too fast for the bureaucrats?

They’re still on the road. I guess that’s what matters.

I’d be shocked if either company had to retract its model over regulations. It makes too much sense. More likely, regulations will change to accommodate them.

I have a car and wouldn’t need these services often. When I do, I’d say I prefer Sidecar’s visibility, but I like Lyft’s spirit. Coke one day. Pepsi the next.

They get me somewhere for cheap and make the ride interesting.

The rest is pretty casual.