The hype surrounding both the Seattle Seahawks and EA Sports’ Madden NFL 25 game are sky-high right now, and both entities collide in a new commercial that features Hawks star quarterback Russell Wilson.

The 70-second promo, titled “Summer Camp,” tells a funny fictitious story about Wilson and equally-popular San Francisco 49ers quarterback Colin Kaepernick. The talented young quarterbacks battle each other on the sticks from their younger days, eventually paving the way for their current “rivalry” in the NFL.

For the record, even though some people really love Kaepernick’s potential, I’d take Wilson over him any day. A better throwing arm and stronger leadership skills — and yes, OK, I am a bit biased.

Anyways, the best part of the commercial comes near the end when Wilson scores a touchdown with himself against Kaepernick and proceeds to kiss his bicep, mocking Kaepernick’s often-used touchdown celebration, a.k.a. Kaepernicking.

“Is that how you do it?” Wilson asks after smooching his own bicep. 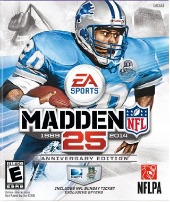 At the end of the video, we’re reminded that the Xbox is the official game console of the NFL — kind of a weird title to hold, isn’t it? — thanks to Microsoft’s huge new deal with the league.

For gamers who plan buying the Xbox One this November but just can’t wait to play Madden, Amazon is offering a deal to upgrade your game for just $10.